NAMESAKE, the first in my Cross Step series, should have released March 30th. It hasn’t, but not for lack of trying.

NAMESAKE first came out in 2010 with publisher Ellora’s Cave. It’s a shapeshifter romance with elements of m/m and m/f pairings, or what today goes by Reverse Harem as a descriptor. When Ellora’s Cave went under (and didn’t pay much of what they owed their authors…but that’s another post), they sent out reversion of rights letters, basically relieving the author of any inability to publish again with another publisher or for themselves.

Fast forward five years and I finally got off my butt, reedited, got a new amazing cover, reformatted, and have been raring to go. To no luck. Amazon is having a problem believing I own the rights to my work, despite having sent my reversion of rights letter to them. The people I’ve talked to about this have been lovely and helpful, but the bots–or whoever at content review–still don’t understand that I wrote the book and own all rights to publish it. So I’m still doing my best to prove ownership so I might publish.

The story is terrific. The characters a ton of fun, and they’ve given me inspiration to finish Kate’s story (KATE COMPLETE, with any luck coming later this month) and then venturing into LOVE THE VIPER to tell Tommy Chen’s story. I also have another Ravager needing a happily ever after, to come after that. 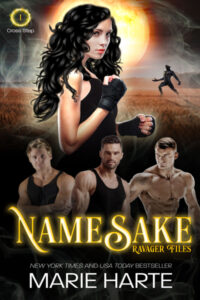 But in the meantime, here’s a snippet of Vicki and her Ravagers to tide you over. Wish me luck! Gah.

After dressing in the rags they’d left of her clothes, Vicki followed the men at a much more leisurely pace and wondered what the hell to think. Four men. Not one. Not even two. But four insatiable Ravagers. Holy shit, talk about a secret she’d take to her grave.

Who the hell would have guessed they’d give her such intense ecstasy? No wonder more and more people turned to Voiders for kicks. But was the intensity of loving so great because she’d been marked, or was it the men themselves?

And how do I look at myself in the mirror having been with four guys at the same time? As great as it was, I don’t think I can do that again. Not without walking bowlegged for the rest of my life.

“You all right, Vicki?” Jesse asked, smirking at her ripped clothing. “Better than that shirt, at least.”

“I don’t know,” Logan teased and grazed her exposed nipple with a finger. “I think the rips add a certain charm.”

When Logan wiggled his eyebrows at her, she muttered, “Ass,” and tried not to smile. Try as she might, she couldn’t be angry with them, and that baffled her. She should have been enraged. They’d practically forced her to have sex, and in the woods no less. Oh really? Is that why when Eric gave you a chance to stop it, you begged him to finish? She flushed and hurried to Eric. She had to grab him by the wrist and yank him to stop, which halted everyone else as well. They really were a pack, she reminded herself.

“Yes?” His eyes gleamed with warmth as he stared at her.

She wanted to demand that the fivesome—God help me, a fivesome—never happen again. But she couldn’t deny she’d enjoyed it. “Explain the bite marks,” she said instead. She swallowed hard. “The marking. My cousin said it makes you crazy for Ravager sex. Is that true?”

Eric and the others exchanged a glance. “Not necessarily. The mark makes it easier for me to find you. It adds my scent to yours, so that any other Ravager will steer clear, knowing where you belong.”

She met him stare for stare. “You own me? Because this says otherwise.” She grazed his hardening shaft with her fingers. Pleased she wasn’t the only one with an addiction, she let him go when his gaze narrowed and his breath grew shallow. “Looks to me like I own you, Prime.” She snorted with amusement, turned her back on him, and walked away.

She heard a scuffle and over her shoulder saw Dom holding him back. Not a smart move to show her back to the enemy, but this particular enemy seemed to thrive on challenge. Eric and the others had mentioned more than once how much they prized a fight. They were in for the fight of their lives if they thought she’d roll over and beg anytime soon.

Logan caught up to her. “Nice one.”

“Yeah,” Jesse said from her other side. He wore a grin, the first she’d seen on his somber face. “I think Dom was right about you.”

“Well, Dom knows things. He’s Eric’s guard. And the prime’s guard is totally in tune with the prime.”

“On a psychic level,” Logan explained.

“Right.” Jesse nodded. “Dom knows what Eric wants almost before he wants it. And Eric wants you.”

“As we can tell.” Logan snickered. “Man, it’s been a long time since any woman’s put him in his place.”

“I mean, Diana and Kate said no to him. But they’re packmates, not lovers. It’ll be interesting to see if your cousin can wrap Diana around his finger. Because you’ve already wrapped Prime around—”

His words were cut off when Eric pulled him away and shoved a fist into his gut.

Startled, Vicki automatically moved to intercede when Jesse caught her. “No. This is for Prime to handle. Logan talks too much.”

Logan clutched his belly and coughed. He glanced up before bowing his head low before Eric. Then he muttered something Vicki couldn’t hear. Apparently assuaged, Eric nodded and let him stand.

Eric strode to her and stopped. Vicki held her breath, waiting to see what he’d do to her. He did nothing but stare. The fire in his eyes reminded her of his energy, bright and blindingly beautiful. She wanted to kiss him all over again, to bend over and let herself be taken.

Aggravated with her stupid sex drive, she forgot caution and poked him in the chest. “What the hell was that—”

Eric stopped her words with a kiss that nearly had her climaxing. When he let her go a minute later, she stumbled. He grinned. “Welcome to the family, pet.”