Look what’s FREE for a limited time! The first in the Dawn Endeavor series, FALLON’S FLAME.

Conspiracies, danger, and sexy shapeshifters collide when the suspense ratchets and the team is sent on a covert mission with a new intepreter that is much more than she seems… 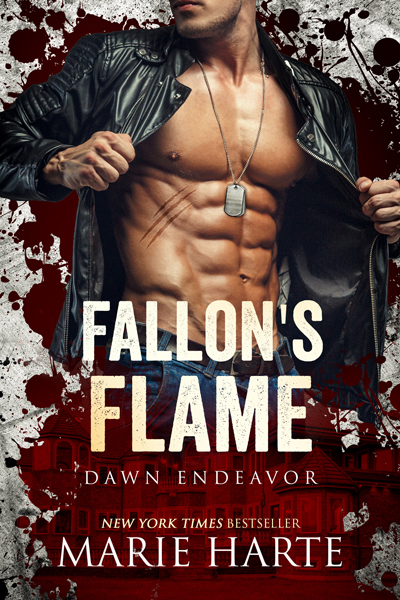 Olivia’s breath left her in a rush when she looked into eyes as brown as warm amber. Short, dark hair framed a masculine face that would make men envious and have women falling all over themselves for a closer look.

A straight nose, square jaw, arched brows, and thick lashes arranged themselves into a face she couldn’t look away from. He had bronzed skin, laugh lines at the corners of his eyes, and firm lips. She had to look up to see him, putting him several inches taller than her own five-eleven. Broad shoulders, thick arms, and a trim waist sat above long, powerful legs encased in jeans. Like the others, he didn’t wear shoes.

He appeared clean shaven, but when she continued to stare at him, she thought she saw a trace of darker skin along his cheeks and neck.

He opened his mouth, and she swore she saw a hint of…fangs? She took a step nearer, needing to see, needing to feel the fan of his breath on her face, to taste the intriguing scent of mint filling the space between them. She licked her lips and leaned closer.

“Gotta go.” He jerked backward and stumbled over his feet in his haste to leave the office.

Olivia had to blink to free herself from his spell. Embarrassed that she’d sent him running from the room, she turned to Mrs. Sharpe, expecting the woman’s dismissal. Nearly jumping her coworker couldn’t have put Olivia in a favorable light.

Instead she found Mrs. Sharpe wearing a wide smile. “Welcome to the team, my dear. I’ll call Ava and get you settled in for the night. Any questions?”

Olivia closed her mouth around a hint of mint. She took a deep breath and realized she hadn’t caught anything Jesse had been feeling. Interesting, to say the least. “Ah no, no questions.” Except for where my mind has gone. Because I really want a look at that Jesse again. Whoa. Wait. Remember, Olivia, you’re here to work as a translator, not a mattress.

“Good. I’ll have Ava show you to your room, and we’ll get the ball rolling.”

As Mrs. Sharpe put events into motion, Olivia wondered just what she’d gotten herself into. The four men she’d met could have posed on any Special Forces poster. Yet they lived in a mansion away from the military base and worked for a civilian woman, a tiny lady who wore a designer suit and pearls. Talk about stepping into wonderland.