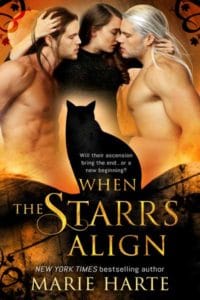 Regan Riley left town ten years ago to save herself from the scourge of the Starr twins. The twin warlocks bullied her into leaving, but even that didn’t stop her powerful crush on the pair. Yet not all was as it seemed. Now Regan’s back in town in time for the Starrs’ ascension into their full, deadly power. But danger creeps closer. Without their magic grounded, the warlocks’ immense power will attract hordes of demonic creatures. Only a strong familiar can balance the warlocks, and only a strong woman can handle two such powerful men. But is Regan ready to open herself to the love that’s never left her?

“I know you took my watch. Give it back.” A dark-haired, brooding mage, with eyes so black they’d always put Regan in mind of endless night, glared at his platinum blond twin.

“Please. What would I want with something that tells time?”

“Perhaps you wanted a keepsake? Because we both know that when the blood moon passes, I’ll be the stronger of us.”

“Bullshit. We both know I’m the one with all the talent.”

A blast of heat, then a sucking energy surrounded the black warlock before he shot it towards his brother. Even from her distance, Regan could feel the warmth, could see the aura of power flow from one brother to the other. It knocked the blond on his ass.

“Shit.” In retaliation, the white warlock rose, blew him a kiss, and shards of ice formed from the moisture in the air, striking the dark mage like tiny needles.

Ha! How do you like it, demonspawn? What does it feel like to be bullied by a Starr? Regan Riley had spent one too many days on the run from the Starr brothers while growing up in Darkton, North Carolina. After ten blessed years of peace, she had no intention of again becoming that scared little geek she’d once been.

She moved on stealthy feet—all four of them—and sneaked out of the house with a handsome watch in her mouth. She darted into the shadow of the barnyard that the jerks arguing inside the main house claimed as theirs and dropped the timepiece. But not pleased that they might be able to find it so easily, she looked around and spotted the perfect hiding place. Suckers.

She returned to her watching spot and hunkered down behind tall grass that hadn’t seen a mower or weed whacker in too long. Her whiskers twitched and her ears alerted her to the presence of field mice nearby. As much as she loved taking on the size and temperament of a domestic tabby, they tended to like to play a little too much. Maybe next time she’d assume the form of a panther to scare the crap out of her adversaries. She smirked at the thought and watched them launch lightning bolts, coils of dark energy and elemental whips of fire and ice at one another as they took their fight outdoors.

Still little boys in big bodies tormenting others. But this time she’d been smart enough to keep out of the crossfire and let them hammer each other.

“I need my watch to help me focus,” Warrick, the black warlock, growled at his brother.

“Screw off.” Chance sneered. “Maybe if you concentrated more on academics and less on swordplay—really, bro, in this day and age?—you wouldn’t need an object to focus you.”

“The sword isn’t for this dimension, asshole. And you’re one to talk. You would have failed out of high school if I hadn’t pulled you through.”

“Please. I was doing Principal Renner’s daughter. No way I was flunking.”

Warrick shook his head. “It’s all fun and games to you. This is serious, Chance. We have to focus. The blood moon is in two weeks. I need to concentrate, and so do you. That spell I was working on might seriously save our asses.”

She cocked her head, interested despite not wanting to be.

Chance sighed and lowered his hands. “All I know is that if we can’t find a familiar by then, we might as well call it quits.”

“True. Neither of us can successfully hold onto our power if we’re too busy trying to—”

She leant forward, not sure why he’d stopped talking. They might lose their power? Bingo. Now what could she possibly do to help that happen?

Then Warrick turned and stared right at her, through the tall grass hiding her small form from view.

Warrick smiled, and the grin did nothing to reassure her. “I’ve got her now.”

Wondering how, once again, the tables had been turned, and not in her favor, she spun and raced through the barn and out into the forest behind it. She’d lose them in the woods for sure. Then she’d try to find some other way to get even with the idiots before they became too powerful for her to handle. If they weren’t already. Two weeks, and time was ticking…