Kate Complete…is not complete. Unfortunately, the delay of Namesake pushed me back on another project, which interfered with this novel. But it should only take a few more days… Thanks for your patience!

In the meantime, how about an excerpt? 😉 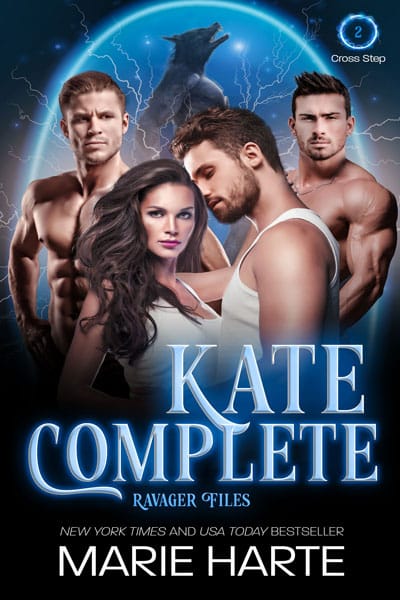 Kellen Lawless returned to his pack’s den, only to find it missing his prime and packmates.

For the past five years, he’d spent his time abroad, collecting intelligence about other areas of the world saturated by Void energy. Though Cross Step remained a Ravager stronghold, a few smaller towns in southern Germany and a small number of areas in France seemed to be growing in Ravager strength. But he’d been called back to complete a vital job for the prime.

Odd that he’d come home to find Nev Lawless gone. Odder still how glad he was of that absence.

The air smelled stale in the darkened cavern, a hint of blood and unbathed bodies lingering in the stains and bits of detritus cluttering pockets of space in the rock walls, on the dirt-covered ground, and scattered near Nev Lawless’s throne, highlighted by a thin stream of sunlight that pierced a hole in the cave’s ceiling.

Kellen immediately transformed into his guer and gained fur and fangs, huge in his warrior’s stance. Unlike others of his kind, he’d been bred to war, a rare berserker who lived to fight. And among Ravagers, that was saying something.

“Shit. Get the others,” the deep voice snarled to someone behind him.

Kellen didn’t think. He attacked. The unfamiliar scent of enemy Ravager reminded him of a past spent constantly on the defense against a clever opponent—the Savage clan—that had taken root in this new world as if made for it.

He didn’t wish to kill, not yet. Kellen slashed with his claws and bit into several bodies, doing damage to a few Ravagers before he realized too many more had arrived for him to handle. Though it annoyed him to pull back, he did, aware Nev would have skinned him for admitting defeat before the enemy.

But Kellen had brains as well as brawn. A Ravager could find new strength to fight another day, but he couldn’t battle an opponent if captured or killed. And he had a mission to accomplish.

Unfortunately, his enemy had smarts as well. Someone shot him. He felt a sting at his throat, what might have been mortal would. Except the pain he should have felt wasn’t there, and neither was the blood. Just a dart he pulled out as his vision faded and he faltered on his feet.

That split second of inattention was all it took for his foe to tackle him to the ground and tie him up.

But as he lost his sight and senses, a familiar feeling of homecoming saturated his brain, and he didn’t struggle the way he should have—the way he wanted to—as he let himself be carried away by the enemy.