It’s nearly two in the afternoon and I thought I’d post. I’m still wrapping up the first in my new series for Sourcebooks. I’ve also been kicking around new stories, as well as writing the end of my Circe’s Recruits 2.0 series. I don’t often work on two projects at once, but with February being a short month and Elijah releasing in March, it’s a necessity. 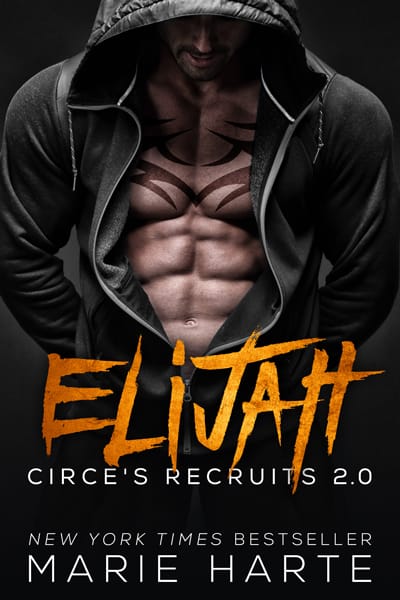 “ARE YOU SHITTING me?” Eli stared in shock at the mound of snow covering the ground outside the house.

Carter sighed. “I’m not doing it.”

“Why not? Just kick that size twenty-one shoe around and most of the snow will be gone.”

Behind them, a woman cleared her throat.

They both spun around.

“Oh, ah, hey, Kennedy.” Eli liked his new “sister” by mating—soon to be marriage, as soon as Alex grew the stones to ask her. Unlike the other couple in the house, Alex and Kennedy were more traditional, Alex the Boy Scout to Kennedy’s Girl Scout. All hearts and flowers and shit.

Their alpha, Gideon, on the other hand, shared a more nontraditional relationship with his mate, Bailey. In other words, the pair seemed happy enough bossing everyone else around while bedhopping with profound carnal enjoyment.

Eli himself had benefited from the insatiable pair just that morning. Man, being the sandwich between Gideon and Bailey never failed to turn him on.

At the thought of his many orgasms, a familiar face popped into his mind’s eye. A nasty piece of female with piercing gray-green eyes and lips that continued to give him naughty fantasies.

Kennedy frowned at him. “You know I’m not trying to look into your mind, right?”

“Your shields are super strong today. Just sayin’.” Their pack’s telepath stayed out of their heads because she considered it rude to encroach. But she claimed Eli kept her out on purpose.

Carter grunted. “I can’t mesmerize him either. It’s like he’s got a natural shield keeping everyone out.” Carter gave a sad sigh. “Sometimes he makes me feel like I used to growing up. Like I’m an outcast.” Carter paused for effect. “But I know he doesn’t mean it.”

Kennedy shook her head. “Come on, Carter. Let’s get you some cocoa.” She glared at Eli. “You be nice.”

She tugged Carter with her back inside. At the doorway, Carter turned and made a face at Eli, then pretended to be all pathetic when talking to Kennedy again.

Eli fought a grin. Carter was such a jackass, but funny nonetheless.

Staring at the three feet of snow clogging the sidewalk, Eli groaned. He grabbed a shovel, and having foregone a coat that would just hamper his movements, started shoveling. Why the hell hadn’t they found a tropical spot to set up headquarters for their new security business, again? Because anything had to beat the Pacific Northwest during the winter time.

As he worked, those gray-green eyes wormed their way into his mind’s eye once more. He saw Kennedy’s traitorous cousin dangling over the shoulder of a monster of a Circ, a psychotic murderer and beast who was known to literally consume other Circs. Next to them, a rogue pyrokinetic had walked, and that guy was just as bad as the cannibal.

But no, the chick, Charlie Wilson, had been scared of him—Elijah Ortiz.

The notion should have pleased hm. Charlie had turned on her cousin and nearly gotten Kennedy and Alex killed. But all he felt when he thought of the petite female who smelled faintly of Circ was confusion.

He had to get a handle on his feelings, and soon, because in just a few days, after the holiday—Kennedy and Bailey had insisted—they’d follow up on the intel Carter and he had collected. Eli thought they’d found Charlie’s location.

Now to figure out how to kidnap a woman who could see the future and would know when and where they were coming from without dying in the process.

Nothing like a challenge to get the blood pumping.

He grinned and shoveled faster, wondering how scared Charlie would be when he tossed her over his shoulder and showed her what it meant to cross the people he loved.