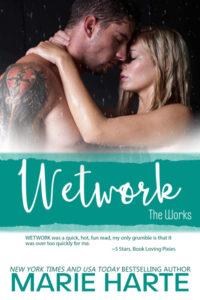 He might command her body, but she owns his heart.

Trevor Doran is trying to fit into civilian life now that he’s no longer working secret missions for the government. But his job as a financial investigator for a security firm doesn’t give him the thrill he needs. With his last love dead from a mission gone wrong, he doesn’t need that kind of life anymore. Does he?

His attention soon turns to the beautiful, shy Emma Clark—a friend of his sister’s who intrigues him. He’s getting a vibe from her that makes him want to know more. Is she as submissive as she seems? When Emma starts receiving unwanted attention from a secret admirer, he steps in to help. Then the case he’s investigating at work gets messy. Danger’s afoot, and it’ll take all his skill to keep Emma safe. And all her patience to get Trevor to open himself up to putting his heart at risk and loving again.

Trevor put his hands on her shoulders, and she tensed.

She gave it to him, bereft when he let her go to hang it in the front closet. Now feeling a bit nervous, she watched him with caution.

He saw and shook his head. “Tsk tsk. Trust me, little mouse.”

“Mouse?” Offended, she placed her hands on her hips and tried to look taller.

“More like a spitting kitten,” he said with a grin. “You’re so cute. That gorgeous blond hair, those dark eyes… I want that kiss, sweetheart.”

His thick voice sounded demanding, yet he stood there, waiting. Leaving it up to her.

She relaxed. Trust him, her conscience told her.

“Well?” he asked, his smile irresistible. “Come take advantage of me, and I’ll give you a homemade brownie. Even better than one of yours, I’ll bet.”

“Oh?” A challenge. She liked that.

So did he, by the sparkle in his blue eyes. “Yeah. One kiss, one brownie. If you think mine is better than yours, I get another kiss. If not, I have to rub your feet for you. And no, I don’t have a foot fetish.” He made a face. “My sister is big on foot rubs for losing a bet. And don’t tell her, but her feet gross me out.”

She laughed. “Maybe mine will too.”

“I’m the same size as Maggie.”

“No, you’re not.” His voice deepened. “Trust me. I don’t think of you and my sister as alike at all.”

“Other than that you both have blond hair, you’re totally different.” He gave her a lingering onceover that brought back her butterflies. This time, in a good way.

Her nervous excitement made her giddy, not nauseous. She closed the distance between them and motioned for him to bend down. “I can’t reach you.”

“No problem.” He leaned down, looking so much larger than her. Then he wrapped his arms around her, not holding her too tight, but supporting her. “Kiss me. I confess I’ve been thinking about this all night.”

It felt like a dream, that a man like Trevor, who could probably snap his fingers and have any woman fall at his feet, would want her. But since she doubted she’d get a second date with the man, she wanted to take advantage of him—the situation.

Flushed and wanting, she reached up and drew his head down. She wanted to sink her fingers into his soft blond hair in need of a cut. So she stroked his nape and felt his shudder.

He watched her, not closing his eyes for the kiss, which made her tremble. She didn’t back down though. Instead, she pulled his mouth to hers and planted a whisper-light kiss on his firm lips.

Like fine wine, he tasted decadent. He let her lead the kiss, not pulling her closer but waiting for her to do the work. Though he remained still, she had no doubt he allowed her to be in charge. As he’d promised, Trevor hadn’t done anything improper, giving her no reason to think he might overwhelm her.

Except he did. The taste of him went straight to her head. She wanted to rub up against him, to feel the hard muscle of him all over her body. Her breasts ached, and her nipples strained against the silky cups of her bra. How amazing to be so turned on by a simple kiss. Maybe she’d been too long without a man. But she didn’t think kissing John or any of her regular male customers would be like this.

Trevor groaned into her mouth, his breath hot, his tongue brushing against hers and sending a shockwave through her system. Then he pulled away and leaned his forehead against hers.

“Jesus. Hold on.” He took a deep breath and let it out slowly. “You’re addictive. Better than your cookies,” he said in a low rumble.

Pleasure stole through her as she enjoyed his embrace. So what if her body felt on fire. She knew it was for the best that they slow down. Didn’t she?

He drew back and stared down at her, and she wondered what he saw. “Let’s get that brownie for you.” He turned and went into the kitchen, and she sagged against his couch, needing the support to remain upright.

Her brain remained in a fog even as he returned bearing the brownie on a plate. He wore a wry grin. “I already had my dessert.” A glance at her lips confirmed he meant her. “And I want seconds. Go ahead. I dare you to tell me this is not the best brownie you’ve ever tasted.”

Now curious, she noted the rich color and dark scent drifting her way. Chocolate and mint. Her favorite combination. Well, excluding the heady taste of Trevor. He spooned a bit and offered it to her, his gaze intent.

“Well?” he asked and took a bite himself, eating off the same fork.

As she chewed, she realized he had indeed bested her. “This is amazing.”

His satisfaction was evident by the smirk on his handsome face. “Oh yeah, it is. Almost as tasty as that kiss.” He cut her another bite and fed it to her. “So I get another kiss?”

Again, not pushing, but asking her.

At her teasing reluctance, his smile faded. “I’m just playing around, Emma. You really don’t have to—”

The big man trying to put her at ease broke down another barrier trying to keep her from falling for him. For once, nice didn’t make her want to run in the other direction. Nothing about Trevor made him seem like a push-over. He acted respectful while still being forceful. So different from her past exes.

“You want to? Not as much as I do.” He set the plate and fork on the table and guided her to the couch. There he sat her over his lap, positioning her like a ragdoll over him. “Damn, you weigh nothing. You sure you ate dinner?”

She grinned. “Flatterer.” How nice of him not to mind her growing backside.

“Seriously. You’re little.” His gaze moved from her face to her breasts and he sighed. “Not little everywhere though. Not where it counts.” He gripped her thighs and kept his hands there. “I’m not gonna lie. I’m dying to touch you, Emma. But I don’t want to rush you, and I sure the hell don’t want you lighting out of here. Be with me because you want to. Like I said, I’m not about forcing you.”

Which disappointed her a bit. She did want to be mastered. But she’d only just met Trevor, and she couldn’t bear freaking him out with her perverse desires, only to have him rush to Maggie and tell her what a pervert Emma was.

“What’s that look?” He cupped her face.

His rough fingers stroked her skin, arcing little jolts of pleasure where he touched.

“Not nothing. Tell me,” he demanded.

The bark of an order had her automatically responding. “I don’t want you to think badly of me.”

His voice softened. “Sweetheart, why would I?”

“Well, I, ah, I don’t mind if you want to tell me what to do a little. You know, you could be a little bossy and kiss me.”

His eyes crinkled. “I could, hmm?” He gripped her thighs tighter. “Maybe…”

“But not tonight. I want you comfortable with me.”

Not tonight…implying there would be another time? “So we’ll date again and then you’ll tell me what to do?”

She felt warm all over. Happy. So happy she leaned down and plastered her mouth to his, letting go of inhibitions to show him what she really wanted. A master, a lover to guide her and demand her submission. She started strong, then forced him to bring her to heel.

And he did, beautifully. What began as her assertive take on the kiss ended with him cupping her head, gripping her hair, and grinding her over him. She was so wet her panties would need a good washing, and she loved every second of it. Especially because he gripped her thighs so hard he’d probably leave marks. And the bite of pain felt exquisite.

When she finally pulled back, they both breathed hard.

“Damn,” he muttered, grimacing when she rocked over him. “I think we’d better sit up.”

“Oh?” She kissed him again, loving the hitch in his breath.

“You’re naughty, aren’t you?” He finally let go of her legs and wrapped his massive arms around her back, holding her close. “I can’t wait to kiss you again. But not now, or I’ll forget myself.”

“What will you forget?” she wanted to know.

“That I’m a nice guy.” He grinned, but she saw nothing nice and everything predatory in the expression. 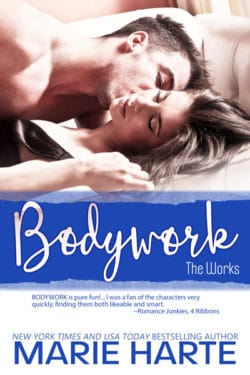 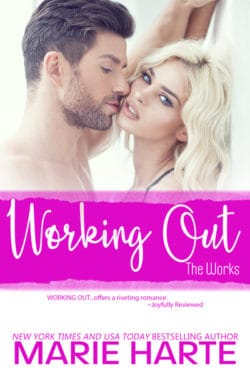