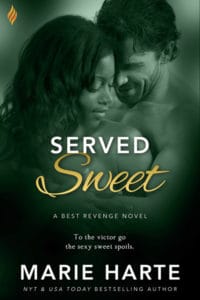 Childhood rivals since grade school, Riley Hewitt and Anson Black have always tried to one-up the other. She’s pretty, smart, and focused. He’s arrogant, handsome and unbeaten. When Anson leaves town right after high school, Riley focuses instead on her grand passion—baking.

Fast forward a few years and she’s thinking of expanding her profitable business when her nemesis returns and decides to build his own restaurant—right next door to hers.

With the help of a large bottle of wine and her two best friends, Riley decides to get even with Anson. He’s still smug and annoying. But worse, he’s drop-dead sexy to boot.

A competition will prove who’s best, once and for all. But spending time together means getting to really know each other. Before long, Riley’s falling for the handsome entrepreneur, and her plans for revenge pale in comparison to how she feels about him.

But if she tells him she loves him, will that put the win in his column? If he doesn’t feel the same, she’s definitely going to lose. And she’s not sure she can afford to have her heart trampled on. Second place won’t cut it this time around.

This book has been previously published.

Staring at the back of his stupid head wasn’t making the night go by any faster. Riley Hewitt stifled a groan, looked away and forced a smile at something Maya said.

Maya, one of Riley’s best friends since the second grade, smirked at her. “You are so not fooling anyone.”

“Oh?” Riley sipped from her wine glass, wishing she’d thought to bring something stronger to Ann and Jack’s engagement party. Like a mallet to bludgeon herself unconscious.

Ann, Maya and Riley had been dubbed the Terrible Trio back in elementary school, when the bonds of friendship had built the foundation for a lifelong sisterhood. Outcasts who’d dared anyone to try to take them down a peg, the three girls had been united in solidarity against boys, catty girls and frozen peas.

Except now her best friends seemed to have gone to the dark side, falling for the handsome men who’d once done them wrong.

Maya stood a few feet from a dream of a guy, her lover and soon-to-be fiancé if Dex had his way. Riley had a feeling there’d be some Valentine’s Day proposing going on in a few more weeks. Across the room, Ann beamed as she stood arm in arm with Jack—both of them high school sweethearts who’d bridged a distance of misunderstanding and heartache to find a lasting love.

Riley’s gaze gravitated to him again, boring a hole into the back of his skull as he chatted with Ann and Jack. As usual, a few women glommed to his sides, like skanky remoras feeding off the predatory shark Riley knew the man to be.

“Yep. There you go. Staring daggers at Anson. Come on, Riley. Go big or go home. Don’t just think about talking smack. Go up to the guy and put him in his place.” Maya, ever the instigator, tossed back a beer, dressed like a runway model in her hippie-chic skirt and sweater.

Like Riley, Maya had a darker skin tone than most in the crowd. Though Riley loved living in Bend, Oregon, the social climate was decidedly paler than those of her African American roots and Maya’s Native American ancestry. Ann, the token redhead of the Terrible Trio, had bonded with the two outsiders early on, as if unaware that homogeny was typically sought after in the white world of Central Oregon.

Proportionately, only a small number of non-Caucasians resided in Bend. Though Riley had dealt with her share of prejudice when younger, she chalked those asshats off to ignorant hicks. Most of the people she now dealt with couldn’t care less about her skin color. They sought her for the treasures she offered in her bakery—Riley’s Sweets.

“I don’t want to ruin Ann’s party,” Riley mumbled in response to Maya’s dare, wishing she had the guts to tell Anson off once and for all.

Anson Black made her blood boil. The handsome bastard had been one-upping her since the science fair in the third grade. Hell, he’d even beaten her in Home Ec with that stupid knitting project—when her mother crafted things for a living. Man, had that been hard to live down at home. They’d gone back and forth, an unending competition between them. She’d always done her best, but somehow he seemed to come out on top of everything that mattered. Fastest boy to her fastest girl on the track team, and of course he’d lorded it over her that his time had set a record for the half mile. She’d been class Valedictorian, but he’d won the Student Council presidency. And though they were both voted Most Likely to Succeed, he’s become a financial genius while she’d just hit the black with her bakery. It was like he’d pulled ahead again, and she needed to even the playing field. Silly, but there it was.

She took pride in the fact that people loved her bakery. Voted number one every year in The Source Weekly’s own Bend’s Best Of list. She’d been on top the past few years while Anson had been doing God-knew-what around the country. And then her nemesis, who’d left town after high school, had come back to stay.

In just four months, he’d wreaked havoc. Not content to be a successful restaurateur away from Bend, he just had to set up shop right next door to Riley’s Sweets. The business was her pride and joy, and according to her friends, a substitute boyfriend that consumed all her time. Anson had made a fortune in the big cities. Why the hell had he come back to her town to set up shop? To destroy her?

Dexter joined Maya, saw Riley, and took a step back, putting his girlfriend between them. “Whoa. Look, it’s not my fault we’re related. I had nothing to do with our fathers being brothers. I swear.”

Dexter Black was Anson’s cousin. The fact Riley approved of him despite his association with his cousin proved he had to be a quality guy.

“I like you, Dex.” Riley patted his arm. The giant lug grinned down at her. He had a few inches on Maya, and man, he was huge. No longer the geeky kid he’d been back in high school, for sure. She shot a side-glance at Anson.

Anson and Dex looked a lot alike. Both too handsome for their own good, with dark hair and large builds. She hated to admit it, but Anson was just her type physically. If he’d keep his mouth shut—a practical impossibility—she might try him on for size. I mean, he’s totally arm candy material. A dream in her fantasies, an egotistical nightmare in reality.

He turned suddenly and caught her studying him. He raised a brow in that supercilious way he had that shot her temper to the moon. Then he grinned, and she wanted nothing more than to kiss—no, knock—that smile off his face.

And that right there. That was her major problem with Anson. As arrogant, obnoxious and annoying as he could be, her body had never gotten the memo that he should be too irritating to be considered boyfriend material. Instead, she continued to have naughty dreams of them doing all manner of things together. And Riley, unfortunately, had never done sex without the emotional commitment. No one-night stands for her.

Ignoring the heat in her cheeks, she smiled back at him and saw his eyes narrow. Then she took her middle finger and scratched at her brow.

He blinked before laughing long and loud.

Great. He’d gotten the message and found it amusing.

“You know,” Dex said as he drew Maya in front of him and rested his chin on her shoulder. “I get the impression maybe Anson likes you.”

“Oh God. Not this again.” Riley finished the wine in her glass and looked around for another.

Maya rolled her eyes but took the glass and left to refill it.

Riley gave Dex credit for his loyalty. But while Dex had been raised to be humble about his brilliance, Anson embraced his many kudos to the point where his head shouldn’t have been able to fit through Ann and Jack’s doorway. “So you’re telling me Mr. I’m-King-of-the-World isn’t full of himself? That his recent nomination as bachelor of the century for that Valentine’s Day charity ball, the one he announced to everyone as soon as he stepped inside this room tonight, is all an act? And what about that way he has of acting like he’s lord of the manor wherever he goes? I mean, really?”

Dex blew out a breath. “Okay, so he brags more than he should. I admit, it can be a little annoying.”

“But he only does that super bossy thing to annoy you. I find it funny as hell.”

She kind of did too, because Anson could be just ridiculous and she had a feeling he knew it. But liking him wasn’t on her agenda, so she frowned.

“Besides, it’s not as if he’s making it all up. He really is that smart, successful and charming, much as it pains me to say.”

Glumly, she accepted the glass Maya handed her upon her return. “I know.” She watched Maya snuggle up to Dex and at least took comfort in her friend’s happiness. Lord knew Maya was a pain in the ass most of the time. She could be a handful, but Dex had managed to wrangle her into submission.

At the thought, Riley felt ill. She could just imagine Dex and Maya playing the sex games she fantasized about. No, not that kind of submission. Jesus, she needed to get her mind out of the gutter. She blamed Anson for that too.

To her relief, a friend and fellow local business owner stepped forward with a smile.

Ben was the head chef and co-owner of A&B’s Fine Food and Friends, a very popular restaurant downtown. He was tall, like Anson, but without the man’s breadth of shoulder, blazing green eyes or arrogance. He was nice, and she loved talking food with him. When the festivals started, she normally asked for her tent to be stationed next to his. It helped he wasn’t stingy when exchanging recipes and samples.

She smiled, noting his shining blue eyes. Safe, nice… She shot a glance at Anson again, saw him flirting with some perky brunette, and gave Ben a wide grin. “Back at ya, handsome. So what’s new on your menu lately?” 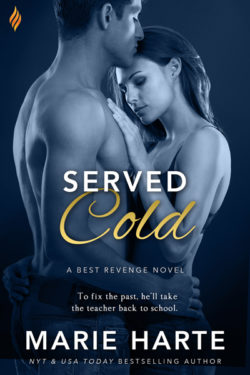 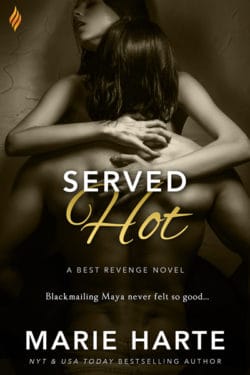