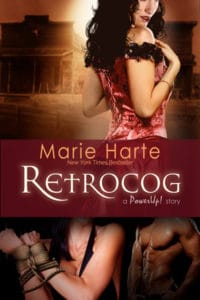 Psychic ex-government agent Noah First is grudgingly settling into life as a civilian when his boss assigns him one of those cases, like the ones he used to do for the government. Given the job of tracking down a stolen painting, Noah finds more than he bargained for when murder is involved. It’s his power to see the past in places where emotions run high, and when he tracks the painting down to a touristy mining town, he lands in serious trouble. A phantom, a woman he can’t resist, and a killer are on the loose. Will Noah find what he’s looking for, or will he end up one more ghost before it’s all over?

This book has been previously released.

“Enjoy your stay.” Lara nodded to the elderly couple and locked their credit card receipt in the old-fashioned register. The nine-room inn, once an infamous saloon and brothel, now boasted polished pinewood floors, comfortable southwestern décor intermixed with nineteenth-century antiques, and the modern conveniences of air-conditioning, spa bathrooms, and a state-of-the-art kitchen Lara used to its fullest. Nine rooms of rental bliss for those who wanted the real Southwestern atmosphere of a brothel done in tasteful hues and tacky tassels. Lara had loved the place the minute she’d laid eyes on it six months ago.

And if she had her way, she’d own it in a few short years.

She watched a couple people relax in the formal living room while their newest guests went upstairs. To both her relief and suspicion, the voice in her head remained quiet. So far, so good. That made two weeks of relative peace.

“Not bad,” Frank said from directly behind her, making her jump. He chuckled. “I am the king of stealth.”

“And a pain in my ass.” She grinned along with him. Lara didn’t take to people, but from day one, something between her and Frank had clicked. Before she could start a volley of verbal abuse that would be sure to take them past their daily insults into truly raunchy rhetoric, a man entered the inn.

Everything around Lara came to a complete halt.

Hello, handsome. About time you arrived.

Lara winced. Oh hell. The voice had returned with a vengeance.

“Honey, I have this one.” Frank preened as he slicked back his shoulder-length dark hair, which emphasized his good looks.

Lara ignored the husky voice clucking in her mind. It really had been a stretch to think she could outrun her past. Especially with all the ghost stories in Brownville. Doing her best to compose herself, she donned the veil of normalcy she’d worked most her life to perfect and huffed, “No way he’s gay.”

“Sexuality has nothing to do with this. It’s all about charm. Just watch me work my magic.”

“Please. Even you can’t turn a straight man gay within five seconds of meeting him. You’re not that good.”

Frank snickered. “But I’d love to try. Come on, Lara, get your head out of the gutter. I’m not after sex.”

He ignored her. “Ten bucks says I can finagle dinner with tall, dark, and handsome. A friendly face to show him around town; that’s all. Sex on the first date is too tacky, anyway. I’m not that easy.”

Yes, he was. Used to Frank’s amusing arrogance, Lara nodded. “You’re on.”

Frank approached the stranger with his typical swagger, one of youth and confidence that never failed to attract attention from both men and women, regardless of their orientation. With bright blue eyes, a trim frame, and a sunny disposition, Frank could charm the scales off a snake. In a town that welcomed temperamental artists of all sizes, shapes, and sexualities, her part-time coworker fit in perfectly. Frank Hanover — popular figure on the art scene and her right-hand man when it came to running the inn.

He rarely struck out when presented with a potential bedmate, and as Lara watched from her position behind a section of the inn’s original bar, she couldn’t help feeling a tingle of disappointment. The stranger took Frank’s hand in a firm grip and seemed to hold it a minute longer than he had to. Just more proof that all the good ones were taken.

She and Frank had the same taste in men. Tall, rugged, and intense. The stranger had shaggy brown hair flecked with gold and paired with light brown eyes that looked closer to… green when he turned his head and the light hit him just right. He had an arresting face, one more interesting than classically handsome. Intelligence shone in his eyes set beneath dark brows that angled in confusion at something Frank said.

Lara couldn’t help noticing the man’s broad shoulders even under the long tan field coat he wore. Oh, and what nice thighs he had. She felt like the big bad wolf angling for a tender morsel and chuckled at the image. Her inner voice chuckled with her, and that quickly, her amusement fled.

At the sound of her laughter, the man looked over Frank’s shoulder and met her gaze.

His eyes widened as if he recognized her in some way. But Lara would never forget a man like him. It wasn’t his looks so much as his presence. He screamed intensity just by standing there. Frank walked with him toward Lara, and she did her best not to smirk at her friend’s barely disguised disappointment.

The stranger looked even taller up close.

They stared at one another, but he didn’t speak. She added silent to her tall, dark, and handsome description.

“Welcome to the Lady Fine Inn.” She wished she didn’t sound so breathless. “I’m Lara, the manager, and I see you already met Frank.”

“I just got into town. Do you have any rooms available?” His voice rushed over her like liquid heat, and to her embarrassment, Lara felt her body respond.

Glad for the short-sleeved sweater masking the tight beads of her nipples, she forced a smile. “You’re in luck. We have two rooms. A standard single that shares a bath with one of the other rooms, or the deluxe suite. It has a king-size bed and its own bath, but it’s more expensive than the standard.”

Good Lord, but his rumble sounded like a mountain lion’s purr. A glance behind him showed Frank biting his lower lip and silently thumping his heart. So it wasn’t just her.

Lara cleared her throat. “How long would you like the room?”

Talk about the decisive, take-charge type. A forbidden thrill zinged through her warped libido. “Can do.” She pushed the guest book toward him. “Please sign in, Mister…”

He handed her his credit card.

She read out loud, “Noah First.”

He showed her his Oregon driver’s license and scrawled his name and a phone number in the guest book while she ran the card.

The sight of his hands arrested her. Strong hands. Large hands.

Odd flashes of heat filled her belly, and she shivered as something inside told her this man had a purpose here. He’d come for her.

And he’d always come for her, a husky feminine voice echoed in a bawdy laugh.

Noah reached for his card. Their fingers touched. He must have felt the jolt between them because his breathing quickened and he leaned closer. When he glanced down at her mouth, she froze, overcome with the desire to taste his firm lips, to see if they felt as sexy as they looked.

They remained unmoving for what felt like forever but was in fact no more than a few seconds. Then Noah took his card back and placed it in his wallet, and their odd connection faded as if it had never been.

He stepped back. “Thanks.”

Lara stared at him, not sure what to think. For a moment, she’d felt so close to him, as if she knew him. But how could she? He stared back at her, a question in his eyes, and she wondered if she’d imagined that brief connection because she wanted there to be one. When was the last time she’d felt a flutter of anticipation in her belly because of a man?

“Right, Lara?” Frank was saying as he reached behind her for the key to room 8.

She looked at him and felt like an idiot for missing the conversation, lost in a stranger’s eyes. “Ah, sure. Right. Enjoy your stay, Mr. First.”

“It’s Noah.” He gave her one last strange look before turning away to follow Frank up the stairs.