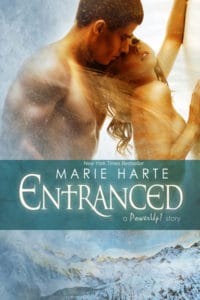 After a disastrous mission for Uncle Sam years ago, psychic, ex-government agent Jack Keiser has been wary of trusting anyone. Keeping his fellow psychics in line is a full time job, made harder by his own strangely developing talent—his ability to change shape. Even among psychics he’s an oddball.

Heather Stallbridge has gone missing, and it’s up to Jack to find her. His journey leads him into the German Alps and to a strange village with even stranger people. The moment Jack sees Heather, he experiences what feels like love at first sight. Their connection is irrefutable, but he can’t trust that it’s real. And that doubt is a problem, because without working together, they’ll never find a way to escape the killers in the mountains, or to discover the unexplainable love growing between them.

This title has been previously published.

Heather had hoped the guy wouldn’t approach her, though he seemed the type to ignore good sense. Huge, menacing, like an animal with a thorn in its paw,  the stranger exuded danger the way Gretchen, next to her, exuded chatty nervous energy. And where the hell had the stranger come from, anyway? She hadn’t seen anyone new in town since she’d arrived two weeks ago.

This place put the W in weird. She’d been trying to leave, with or without her book, but every time she managed to get near the gate through which she’d entered, one of the townspeople found her and somehow managed to convince her to stay. And that main road where the new guy had shown up? Fifty feet from where she sat, around the bend, it dead-ended in the forest. So where had the giant come from? It was like a bad Twilight Zone episode, except the people here were nice…for the most part. She had no idea what they wanted with her, except to make her their new best friend. Bizarro.

If that weren’t strange enough, she couldn’t seem to hold on to her book, Chronicles. The blasted thing had to be cursed. It had been stolen from her family over a year ago, retrieved five weeks ago, and before she’d had a chance to fully translate the code hidden in the pages, she’d lost it somehow in this funny town.

Because of the book, she’d found herself stranded here. Wherever the hell here really was. The town didn’t exist on a map, on Google Earth, or in any atlas she’d ever seen.

She nodded at Gretchen again, thanking fate that she’d learned the Bavarian dialect of German at an early enough age to speak it like a native. Way to go, Granddad. The old woman shared gossip about who was dating whom and which woman had burned her husband’s breakfast that morning. In a town the size of three hundred, everyone pretty much knew everyone.

“Yes, so handsome. This one we like. He and you will make big, strong babies. I can feel it.”

Heather tuned back into the conversation. “What?”

“Yes. Jan knows much about things.”

From what Heather had seen, Gretchen’s brother knew how to skin venison and could shoot through the eye of a needle. Now the man knew things? She suddenly had a bad, bad feeling about her stay, especially if he knew the truth about her. She’d been pretending to be Heather Wurtz, great-niece to the town’s oldest woman, the local wise woman and a revered leader. The first person she’d met, Ida had insisted on a private audience, for which Heather remained eternally grateful. Ida had proclaimed Heather her long-lost niece, and like that, Heather had found acceptance and security. An ally in a place she’d never imagined might be so dangerous.

Apparently, the Stallbridge name was hated enough to get her killed, and she had no urge to find herself gutted and strung up the way Jan’s deer had been just a few days ago. In this place, Ida might be respected, but Ralf Baer kept the law with a mighty fist. And his sons Ernst and Klaus gave her the shivers. She didn’t like the way they looked at her.

Which led her thoughts back to the stranger. Should she put him on the good list or bad list? He didn’t seem to be one of them. It appeared he’d come upon the town like she had, out of the blue. A sudden thought hit her. What if Owen had sent him? She’d told her brother over and over to leave her alone, that she needed to solve this riddle by herself, to contribute something of her own to the family. Determined to fulfill the quest started by her great-grandfather, Heather meant to solve the puzzle in that damn book. But Owen wouldn’t let it rest. And if he’d sent the stranger, he just might get her killed.

She stood suddenly. “Um, Gretchen? I’ll be right back.”

Gretchen winked at her. “If I wasn’t sixty-eight, I might make a play for him myself. I’ll be here.” She held up her cup of tea and raised it in appreciation, then took a drink and turned to converse with her neighbor.

Heather took the opportunity to slide away from the tea party, as she’d come to calling the group that met regularly outside Edda’s Tea Shop, and looked for the stranger. She spotted his vehicle and noted the rental tags. Not a local, then.Sh*t.

Hurrying to the most probable place he’d gone, she entered the pub and overheard him say, “So how long has Heather been here?” Heather. Damn. He knew her name.

She rushed to his side and put on the brightest smile she could. “I can’t believe you’re here! Sorry, but the light was behind you outside, and I almost didn’t recognize you.” Heather hugged him hard, dragging his head closer so she could whisper, “My name is Heather Wurtz. Hug me back, damn it.”

He didn’t falter and swept her into a bone-crushing hug. He nuzzled her cheek, sending shivers down her spine, and whispered back, “Jack Harmon. Strawman sent me.”

Owen had sent this man. Strawman was the code word Owen used to prove association. Whoever else this guy might be, her brother trusted him to come after her.

When they finished embracing, Jack kept a muscled arm around her. Up close, he set her libido on high alert. But that wasn’t all. Her ability to heal sensed deep wounds in this man, and she had the crazy notion to plaster herself to him and inhale him, one kiss at a time, until he recovered from past trauma and she reached orgasm.

So unlike her. Sex and healing had never been joined together, in any way.

She squirmed, and he tightened his grip on her shoulder. He had killer eyes, light gray one moment and then a hint of blue the next. But that fierce expression, coupled with his incredible size and breadth of muscle, warned her to tread carefully. For all that the guy had a rough kind of handsome sexiness going on, he also had a serial-killer vibe she’d need to keep an eye on.

Hans at the bar stared at him with suspicion. “You aren’t part of the ski group, are you? How did you get here?”

“Ski group?” She and Jack asked at the same time.

Heather talked over him. “Hans, I’ve been here for two weeks and haven’t seen anyone but the locals.”

“Of course not, sweetheart.” Hans grinned. “We keep family tight, right here.” He patted his chest. “The stupid Americans and the idiot locals are kept outside the yellow gate, the one by Jan’s cottage.” Hans blinked at Jack. “Jan… Of course. Forgive me. Jan said you’d be coming.”

“He did?” Jack’s deep voice soothed her, despite the tenor that sounded more like the growl of a hungry beast.

“Yes. We’ve been more than curious about Heather’s boyfriend.”

Oh boy, that was all she needed. An imaginary lover. Heather said in a rush, “I need to take him to see Aunt Ida. I know she can’t wait to see him again, and she told me to let her know as soon as he arrived. We’ll be back later, though.”

Hans nodded. When Jack tried to pay him for the beer, Hans shook his head. “No, not for Heather’s man. You go and settle in.” Jack stuck out his hand, and Hans shook it, grunting. “Firm, strong shake. It’s good you came to Drei-Gewalten. We need to build our stock and let it grow.”

Stock? “Drei-Gewalten. Great name for a town, huh?” she said to get Jack up to speed.

She didn’t breathe a sigh of relief until they left the pub and headed down the street, away from the tea shop.

“Yeah, we can catch up at Aunt Ida’s, for sure.” She squeezed his hand in hers. He squeezed back, and it didn’t escape her notice that his palm completely covered hers. When she tried to discreetly tug her hand away, he wouldn’t let go.

“That we will, sweetheart. I can’t wait.”