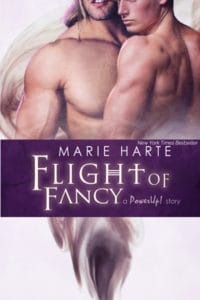 When Aidan Marshall’s boss assigns him a mission to retrieve a stolen book, he jumps at the chance to prove his worth once again to the team. Aidan is a telepath, and he knows he makes other uncomfortable. He likes working by himself and has nearly located the book when Gavin Caldwell screws up the entire case.

Gavin is a pain in the ass. He’s a pencil pusher, a holdover from the nightmare that was the government’s Psychic Warfare Program. It doesn’t help matters that he’s just Aidan’s type.

With no recourse but to use Gavin to right the wrong he’s done, Aidan and Gavin go undercover in a high stakes operation posing as lovers, in a place where anything and everything goes. In the course of their mission, Aidan finds out there’s much more to Gavin than meets the eye, and much more to himself than he’d ever thought possible. Because with Gavin, Aidan learns not only to love another man, but himself as well.

Gavin groaned and fell back on the couch. His small condo overlooking the Deschutes River had been pricey but worth it. During the warmer months, he left his patio door open and listened to the rushing water, enjoying the calm that nature brought. Today’s low temperature kept the river’s music muted through the wind-blocking doors, so he lay on his cushy sofa and stared at the ceiling. He did that a lot lately, assessing and reassessing his life.

The need for action pricked beneath the surface. His intuition screamed at him to do something. He just didn’t know what. He’d like to go back to the gym, head downstairs into the underground training area known only to the team, and beat the hell out of someone. Namely, Aidan. The smug bastard.

He clenched his fists as an image of the man intruded on his thoughts. That blond hair was too long, his brown eyes too dark, his physical presence too overpowering. Everything about Aidan was a little too much. Gavin swore. Someday, Aidan would screw up. Mr. Perfect couldn’t be 100 percent right all the time. Gavin just hoped he’d be there when the dickhead tripped over his own feet.

It was easy to pick on Gavin. Yeah, he’d screwed up the first time an enemy had fired real bullets at him. Sue him—he’d frozen. A logical reaction most normal people might have. After freezing up, he’d shot straight up into the air, his fight-or-flight instincts on overdrive. Problem was, bullets could travel up. The smart thing would have been to take cover. At the time, he’d been with his trainer. Caleb Dalton was as big a jerk as Aidan, and the man had torn him a new one after saving his ass.

Did Gavin deserve the reprimand? Probably. But to fix Gavin’s fear, Dalton should have thrown him right back into danger, so that he could get used to life-and-death situations. Instead, Dalton had grounded him and ordered that he put his math degree to work saving the government money, an attitude Admiral London had seconded.

That hurt. Gavin greatly respected the admiral, so he strove to please him by doing the best job he could, even behind a desk. His efforts to be noticed had backfired, though. He’d been too good at his job, and no one wanted to let him return to the field.

“Kind of like now,” he grumbled and blinked when he realized the ceiling looked closer than it had before.

With a muffled oath, he glanced down at the receding couch, now several feet below his body. What he wouldn’t give for a useful talent. Something like Keegan’s powerful telekinesis, or James’s awesome ability to control fire. Aidan, as annoying as he was, could read minds.

Maybe that wasn’t such a good talent to have, Gavin thought as he lowered himself to the sofa once more. The PowerUp! group were a friendly bunch, but even among fellow psychics, Aidan stood apart. Gavin remained distanced because he’d failed and couldn’t bear the disdain he imagined sat at the forefront of the others’ minds. But Aidan always got the job done. It was his mind-reading ability that freaked out the team. Hell, it freaked Gavin out. He hated Aidan picking on him. But he wasn’t a kid. He couldn’t claim the guy bullied him, or he’d look like more of a weakling than usual.

Nobody bullied Jack. Or Keegan, James, Nathan, Avery, Noah, Chloe… He groaned. Ian, the slightest member of their team and newest addition, didn’t take anyone’s shit. Mess with him, and he’d empty your bank accounts or forge documents to land you in jail. Gavin could only threaten to hover high above his opponents. Yeah, big threat.

He sighed, wondering if tomorrow morning would suck as much as he thought it might. There was no way Jack would give him a job in the field. Gavin’s time with Kitty in the morning would no doubt be an exercise in patience, while the pretty empath convinced him to relax. Kitty manipulated emotion, but she seemed to actually like him, unlike the rest of the team.

He’d probably spend his time working out, which would at least ease the psychic pressure building inside him. The gene therapy he’d undergone while the PWP had been active had expanded his talent. He’d only been able to move a few inches off the ground before the program, and the stress from doing even that little bit had produced nosebleeds. Now he could rise dozens of feet into the sky and float without fear of falling. Tomorrow he’d exercise and ignore the computer for once.

Hell, anything was better than crunching more numbers.

Back on the couch, he pulled a blanket over himself and started to drift into a light nap when a knock came at the door. A heavy hand rapped several times, and then the doorbell rang unceasingly.

Gavin tossed aside the blanket, rolled to his feet, and stalked to the door. “Hold on.” Jesus, give me a chance to reach the doorknob at least. He yanked open the door. “What the…hell?”

He stared in shock at an annoyed Aidan Marshall glaring down at him. Without asking, Aidan muscled past him and stopped in the center of the living room. “Nice. Not what I expected.”

Gavin shut the door and frowned as he joined Aidan in the middle of his living room. “Expected? Why are you here? What do you want?”

Aidan didn’t answer. Instead he turned to face Gavin, his intense scrutiny more than uncomfortable. There was an almost personal aspect to his study that alarmed Gavin, because he sensed a toughness in Aidan that would extend beyond the normal day-to-day. He’d be tough with his boyfriends. Demanding. Sexually aggressive.

Not good thoughts to be thinking with the mind reader so near.

Fortunately, Aidan didn’t react at all. The hulking blond circled him, his gaze roaming from Gavin’s hair to his toes. Gavin shivered—from excitement, not the cold—wishing he’d thrown on a sweatshirt to cover the plain white tee he wore.

“You have nice feet.”

“O-kay.” Gavin didn’t know what the hell Aidan was doing in his condo. He followed the man’s gaze to his bare feet, suddenly noticing the cold. Ignoring Aidan for the moment, he turned and moved to the fireplace. With the flip of a switch, he ignited the gas logs.

When he turned around, Aidan was right there, caging him between the mantel and his hard body.

Firm lips cut him off. Holy shit was all he could think as Aidan Marshall took command of his mouth. Who knew he could kiss like that, or that the chemistry between them would turn combustible between one heartbeat and the next?