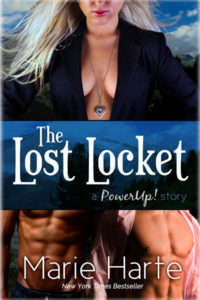 Psychic ex-government agent Keegan Price likes beer, sex, and relaxing after a hard day’s work. He’s looking forward to exercising his telekinetic skills on a real case. Finding a lost locket seems almost too easy, but hey, it’s a job away from the civilian world. When James Foreman tags along, so much the better. Foreman’s a wiseass who loves a good time, and his ability to manipulate fire with a snap comes in handy. Keegan knows they’re overqualified for this simple retrieval, but he figures he and James have earned a working vacation after spending so many hours in that damned gym. Except the case turns out to be anything but simple. The locket’s a weapon, he and James can’t take their eyes off the woman wearing it, and their spiraling sexual attraction for each other and her makes for one hell of a ride.

“Foreman, swear to God, you change the buttons on the satellite radio again and I’ll kick your ass from here to fucking Phoenix!” Keegan shouted two days later from the driver’s side as he fiddled with the car radio. Obnoxious rave music pounded in the SUV instead of the catchy crooning of country’s best.

James chuckled from the backseat, where the bastard was currently reading a book. Lord love him, but James had a real talent for annoying the shit out of Keegan. And though he hated to admit it, anger wasn’t the only thing the guy aroused. Lately, Keegan’s confusing feelings had turned decidedly…carnal.

“I thought this job was about de-stressing?” said the most laid-back man in the world. “You know we won’t fail this assignment. You can’t be worried that we’ll be responsible for the gym going under.”

“I’m not. Jack’s an ass. We’ve never not come through before. And I doubt one missing locket would lose us this client. Where the hell else is this guy going to find a group of specialized psychics as powerful as former PWP agents?”

“Then why are you so tense all the time, cowboy? Don’t you good old boys know how to relax? Maybe you need to get laid. Or sucked off. Find a rest stop and look for a hole in one of the stalls.” He chuckled. “Man, I’d pay to see that.”

Keegan gripped the steering wheel tight, refusing to take the bait. Damned if James wasn’t messing with his head. Keegan had no problems when it came to women. He loved licking them, sucking them, kissing them. Never fucked a guy and frankly didn’t want to. He’d never wanted a man that way, not really. He glanced in the rearview again at James.

The jerk made him laugh, always had his back, and couldn’t walk away from an I-told-you-so if his life depended on it. James was way too aggravating to even think of in context of a sexual relationship — if Keegan had thought of it, which he hadn’t.

He blew out a breath. Keegan didn’t care what others did in their own lives, but man-on-woman, or man-on-women sex, satisfied him just fine. His daddy’d be proud his boy was following in his large footsteps.

Their conversation from a few days ago refused to leave his mind. And last night made it hard to think about anything other than how incredible James looked when naked.

Sure, they’d worked together for a few years. Partners who knew a lot about each other, but not everything. Keegan, for one, had never seen James behind a woman the way he’d been last night. Taking her ass while she’d cried out for more. Talk about the wrong time to come back to their hotel room early. Keegan had returned from a tame night playing pool in the hotel bar, hoping to get a good night’s rest. So much for that.

“You okay up there?” James’s stare met his in the rearview mirror. “You look tired.”

The smirk on his face nearly had Keegan pulling over to beat on him. But he knew for a fact James couldn’t read minds. No way the man could know how confused, how off centered Keegan felt, and all because of him.

“Yeah, right.” James sighed and leaned forward. He placed his hand on Keegan’s shoulder, and Keegan’s entire body locked up tight. “Man, you are tense. I know what this is about, and I’m sorry.”

“I should have asked you to join me last night.”

“With Linda. She gave great head, by the way. Yeah, we could have done her together. Gotten off and been so mellow. Better than any high, I’m telling you.” James sighed and leaned back against his seat again. He closed his eyes and smiled, and Keegan had the odd sensation of looking at a truly beautiful man.

How fucked up is it that I’m thinking he’s pretty? Keegan swallowed around a dry throat.

“Coming in her ass was a dream. Not that I dig condoms, but there’s something about a narrow passage. Yeah, I’m an ass man.” James chuckled.

“For God’s sake, quit talking about it.” Keegan hated that his accent sounded so thick, a sure sign he was upset.

James laughed. “Yeah, Jethro. You find yourself a pretty gal in Phoenix. Hell, make sure you wear your hat and croon to them in that gravelly voice of yours, and they’ll be creaming before you can say boo.”

They rode in silence for a while before Keegan dared ask the question at the forefront of his mind. “James?”

“So last night… You were with a woman.”

“I do. It’s more about the person than the gender with me.”

“So you really are bi. I thought that was a rumor started by Patten back in DC. He had a hard-on for you big time.” The man had lived to get James in trouble. Any way, any how.

Keegan stared in shock at James in the rearview. “You’re telling me he balled you?”

Keegan breathed a sigh of relief. Their old supervisor had been such an asshole.

“I balled him. Not a great lay, but it finally got him off my ass, literally, mind you.”

“Holy shit. You did Patten?”

“Well, don’t get too excited. It only happened once. The repressed asshole actually thanked me for showing him who he really was. He cried afterward, and in a weird way, I felt like I was doing a service for all gay people everywhere.”

Keegan shared a grin with him.

James continued, “I opened the door for him in a big way. I’m good like that.”

Was it Keegan’s imagination, or did James sound as if he were implying something?

“Then again, I’m not nearly as impressive as you are, cowboy.”

“Not those stories again.”

“I heard you had the entire senior staff of the PWP half in love. The men wanted to be you, the women wanted to do you.”

Keegan flushed and focused on the road. “I’m not a horndog. I genuinely like women.”

“I know. I never said otherwise.”

James sat up, looking affronted. “I don’t either. I just corrected your mistake. I don’t let others do me. I like to be on top. But sometimes I make exceptions.”

“Yeah?” Keegan so didn’t want to have this conversation, but some insane part of his brain wouldn’t shut the hell up because he needed to know.

“Depends on the partner, really. I’m pretty selective about my love life, believe it or not. And I like to top other men. But when the right man comes along, it’s different.”

Was James waiting for the right man, or had he meant that only the “right” men he’d already had made a difference?

Keegan unconsciously spread his legs wider to ease the ache in his balls. This trip was turning into the ride from hell.