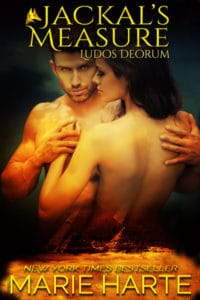 Welcome to the Games of the Gods

A member of Anubis’s Elite Guard, Tariq has spent several lifetimes serving a just god. He does his part to stay on the right path. There’s a darkness in him, a potential for great destruction should he ever let it loose. Helping the righteous dead and protecting Anubis fills him with purpose. Unfortunately, Set, the god of chaos, has wicked plans for Tariq’s power.

Centuries of torture at Set’s hands have numbed him to the pain, but lately Tariq is getting tired. Ludos Deorum, the Games of the Gods, has stuck him Portland of all places, protecting Anubis’s territory. Tariq is away from his home in the Egyptian Underworld, constantly bombarded by Set’s temptation. Then he sees her—a woman he knows, a woman he’s dreamed about for years.

Eden Dixon, a mortal, has denied Set, and what Set wants, Set gets. Enspelled to bring her to his tormenter, Tariq can do no other than obey. But even the god of chaos doesn’t know everything. Eden is much more than she seems. She makes his missing heart beat again. Tariq cannot—will not—turn her over to Set. Except Eden doesn’t know who she really is. Tariq’s salvation, or the tool of his destruction.

Eden took a moment to understand him. “W-what?”

He stared at her mouth a moment before looking back at her eyes. “Who are you?”

What name had she given his friend? She couldn’t for the life of her remember. “Who are you?”

“I am Tariq. What are you about with Set?”

At the name Set, his voice grew softer, more menacing, and the warm glint in his gaze hardened.

More questions she didn’t understand. “Um, my next batch of perfume isn’t ready yet, but I have some lavender in my workroom out back.” Hel-lo, Crazytown. Why did all the sexy ones have to be so nuts?

“You wish for me to kill you?” he asked as casually as one requested a latte.

She tensed. “Of course not.” Her will faltered. “I don’t know what you want.” She tried to be strong, but any way she looked at it, she’d been pushed beyond reasonable since losing nine hours of her life yesterday and being attacked by a giant today. Fear, longing, confusion—all of her emotions pushed her into a weepy state, and she absolutely hated to cry.

She blinked through her tears, not expecting him to react one way or another.

Then he did the oddest thing. “One so beautiful should not cry,” he said gruffly and dried her tears with long fingers.

“Y-you’re going to kill me. W-what do you c-care?” Oh hell, she was all drippy. Such an ugly crier.

The big guy didn’t answer. He leaned close and kissed her again, and like before, her entire body lit up like a Christmas tree. He sighed against her mouth and let go of her hands. She buried them in his hair, pulling him closer, unable to resist the magic of a killer about to strangle her.

She knew the insanity of the moment, called herself all kinds of fool, but couldn’t resist him.

Until he moaned and pulled back to rest his forehead against hers. “Now you must come with me.”

God, I’m about to come with or without you if you grind into me again. He was huge and hard, and she wanted him inside her in the worst way.

He swore in a foreign language, pulled back to stare into her eyes, and stroked his finger down her cheek. “What is your name?”

“Why?” She felt her fire come back, no longer weepy. Thank God. “So you can choke the life out of me while knowing it, Tariq?”

He shifted against her, his eyes nearly black, and fitted himself tighter between her legs. “Choking is not what I have in mind.” His slow smile had her heart racing even faster, and not out of fear. “But not here, little one. We must go.”

“But I…” What she wanted to say trailed off as she lost herself in his gaze.

She heard him sigh, felt another kiss against her lips, then succumbed to the whisper of sleep beckoning her close.

Note: This book previously released in 2014 with another publisher. The book has been re-edited but not revised, and has the same content as the previous edition. 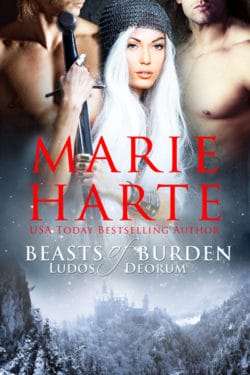