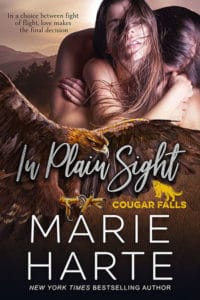 In a choice between fight or flight, love makes the final decision.

Cullen Whitefeather is Ac-taw –a fierce golden eagle shapeshifter. The ultimate predator, he doesn’t shy away from confrontation…unless it involves one tempting, smart-mouthed woman. The woman destined to be his mate. The woman who doesn’t even know he’s alive.

Sarah Duncan made one mistake years ago and hasn’t stopped paying for it since. Tired of the town’s treatment, she finally tells the truth about what really happened and pays a hard price. Her clan wants to silence her. Permanently.

Rescue comes from a completely unexpected source—Cullen, a man who can barely seem to string two sentences together. Yet his fierce protectiveness, compassion, and bewitching touch are worth more than a thousand words.

With Sarah so close, Cullen is losing his mind—and his heart. She says she wants to leave, and the raptors want her gone. But if there’s one thing Cullen’s good at, it’s a fight. And he’s not letting her go without one.

He baffled her. Who was Cullen Whitefeather? As much of a predator as he was, he hadn’t made a move on her until tonight. And he’d given her a room with a lock, as well as the only two keys to the door.

Cullen did his best to show her she was safe here, until she’d catch him watching her with those eagle eyes, eyes that missed nothing. Had he seen her unwilling attraction to him? Did he know how many times she’d gazed at his mouth, wondering how he’d kiss? She wasn’t sure if her eager response to him was the result of chemistry or an awakened need for physical intimacy.

She wished she had more to go by when it came to sexual experience. If she was half the slut she’d been painted to be, she’d have thrown him to the ground and jumped his bones. Instead, pathetic nobody that she was, Sarah blushed every time she caught him looking at her.

God, even her subconscious was confused. She’d spent the past few days dwelling on the innuendos about her sexual promiscuity, yet she lusted after the man who’d saved her.

Disgruntled that she couldn’t seem to dwell on anything without Cullen’s face clouding her thoughts, Sarah changed into the flannel pajamas she’d packed, turned out the light, and curled up in bed under the heavy blanket Cullen had given her. She should have been tired, but she couldn’t sleep.

She’d spent the day alternately reading and watching television. Cullen’s media room held a number of recent movie titles she’d wanted to see, and she’d filled the afternoon immersed in fantasy worlds where the hero took down the villain and got the girl in the end. A happy ending, at least for someone.

Watching such fantasy, Sarah had imagined Cullen in the lead role. The mysterious hero, so silent, so strong. Curiously, his quiet freed her from worry. She liked being around him. She couldn’t deny she loved looking at him, though she hoped she’d been a bit less obvious in her gawking than he’d been while staring at her. Cullen had a body made for sin, streamlined muscles that could cradle a wounded bird to his chest or lash out at an enemy in a heartbeat. His shoulder-length black hair looked so silky and fine. She wanted to run her fingers through it, to stroke him as she would a feathered bird. His eyes captivated. So dark one minute, so bright gold the next. He was like a wild animal held in thrall by magical means.

Cullen, her bird sighed with longing. Mine.

Lost in another argument with her animal spirit, she started when he knocked on the door.

The knob turned slowly. She hadn’t locked it tonight. Funny he chose this night to visit.

He stepped inside and flicked on the light, dressed in his jeans and nothing else.

Good Lord, I’m in heaven. His sculpted muscles rippled as he moved, his stomach a washboard of temptation that had her fingers itching so badly to touch.

“I wanted to check on your injuries, and to make sure you don’t need anything before I go to sleep.”

She’d gently refused his assistance since he’d patched her up. Sarah could have seen to herself just fine tonight, but a niggling urge to have his hands on her took away any sense of caution. “Uh, okay.”

Cullen sat on the edge of her bed while she answered, apparently planning on helping her whether she wanted him to or not. Excitement, not fear, pulsed in her veins. He pulled the covers down to her waist and shook his head when she moved.

“No, lie there. I’ll do it.” His voice sounded deeper, huskier.

She nodded. He slowly unbuttoned her flannel top from the bottom to just under her breasts. Pushing the material aside, he ran a hot hand over her ribs and the prickle of a scar bruising her belly.

Feels incredible. “Oh, uh, right. It’s healing. No problem.” She could barely speak, so absorbed with the warmth bleeding through his palm. Her breasts felt heavy, and her sex pulsed with a need she’d never before felt, not even with Will.

“How about the other one?”

“Your other wound, the one between your, uh, under the last button.” He licked his lips, the motion drawing her attention to that firm, gorgeous mouth. “Sarah?” he asked, his breathing ragged.

She couldn’t think past the need boiling within her. Her inner raptor flailed wildly, wanting to get as close as possible to Cullen Whitefeather. “I don’t know,” she breathed.

Cullen slid the last button free. Her shirt gaped, but didn’t fall apart until he pushed the sides away, baring her breasts.

“Damn,” he rasped, staring not at the slight line on her skin, but on the aching points of her nipples.

He ran a knuckle over the fading injury. “Almost healed,” he said, brushing the underside of her breasts. “How does it feel?”

“It aches,” she admitted, meaning her breasts, her body, her desire for this man she didn’t really know, but needed with her last breath.

“Yeah,” he agreed and lowered his head. The feel of his mouth over her breast stunned her. And then he sucked on her nipple, and she lost her will to do anything but feel.

He cupped her other breast, kneading and teasing it until she wanted to scream. All the while, he tormented her nipple with small bites and the generous suction of his talented mouth.

She groaned his name when he left her, only to sigh when he lavished her other breast with the same attention. Squirming to relieve the tension in her body, she still wasn’t prepared when he slid a hand beneath the waist of her pajama bottoms.

“Shh, trust me,” he whispered, leaning up to meet her gaze. His eyes were bright gold, blinding in their intensity.

“I do,” she replied with the truth.

This book contains explicit sex, a woman done wrong, birds of prey, sexy men who can’t talk to women, and red hot lovin’ that’ll make you wish you could fly.