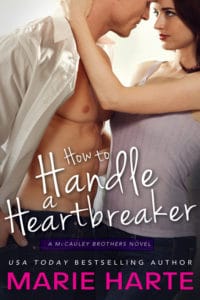 Brody Singer took one look at Abby Dunn and fell in instant lust. Abby looks a lot like a woman he once knew, one who died years ago. But is his attraction merely a holdover from a secret crush from long ago? But Abby’s definitely someone different. She’s a lot shier, a lot sexier, and despite her attempts to dissuade his interest, mesmerizing.

Abby isn’t having it. She’s still trying to put her last disastrous relationship behind her and overcome the flaws her ex so kindly pointed out. She’s too short, too plump, too boring, too blah. But somehow Brody isn’t getting the picture that someone as handsome and built as he is should be with a woman far prettier. It doesn’t help that when writing her steamy books, she keeps casting Brody as the hero.

Only Abby can write her own ending. She just has to decide which version to keep: the one where she shows Brody she’s a woman worth keeping and he’s a man worth loving? Or the one where she settles for a rough draft of a life, alone and safe from ever getting hurt again?

“Either you get her away from Rick or I will. She’s been sitting with him for over half an hour. And look.” Brody curled his fingers into a fist. “Her hand’s on his knee again.” He took an unconscious step forward, unable to think past the need to get Abby away from a potential rival.

“Stop. I swear, that costume is going to your head. You’re not some badass in the Wild West.” Flynn eyed him up and down, a wary look on his face. “Just wait here and go with whatever I tell her. Okay?”

“Fine. Lie, cheat, steal, but if that woman isn’t right here in the next two minutes, I’m taking matters into my own hands.”

“Thought you’d been doing that anyway.” Flynn gave him a pitying glance.

Brody shot him the finger, not pleased when his friend laughed at him.

He watched as Flynn approached the bar. Flynn shook Rick’s hand while Brody turned to look as if he was perusing the crowd, trying not to seem as if he’d been shooting invisible daggers into his soon to be ex-friend, Rick. Flynn said something, and Abby laughed. A deep-throated chuckle that had more than one male head turning to watch her.

Jesus, she killed him with that dress. What had Maddie been thinking to pour Abby into it? According to Flynn, Maddie had thought to help Abby through a dry spell. Hello? Why had no one called him in to help? At least Flynn knew better than to keep him in the dark.

Abby wanted to celebrate? He’d help her party all night long. But a glance at her empty cup and the knowledge she’d already had a bit to drink gave him second thoughts. Brody and alcohol didn’t mix well, and he’d never, ever take a woman not sure of her sobriety. He might be a Singer in name, but never by actions. His father and brother were sure as shit going to hell. Not him.

He had no problem drinking because he had limits he never breached. Abby had already rounded the happy bus and was sliding perilously toward sloppy drunk. She could barely walk next to Flynn as they joined him.

“Hey, Abby.” He couldn’t help his husky voice. Aroused and relieved she was away from a scowling Rick, he tipped his hat at Rick and watched with good cheer as the guy stomped away.

“Where is she?” Abby asked.

“She?” Poor woman. Drunk off her ass.

She teetered again, then slapped at Flynn when he reached for her. “I’m not drunk, I keep telling you. It’s these stupid heels.”

Not drunk? The possibility of a different ending for the night immediately translated to the needy part between Brody’s legs. Oh boy. Good thing he’d foregone the chaps and wore plain denim to match his black shirt and hat.

Abby steadied herself by grabbing onto his arm and slid her feet out of her shoes. “Oh, that is so much better. So where’s this woman you supposedly need saving from?” Then she glanced up at Brody and blinked. “Black Bart?”

“Black is a good look on me.” He tried keeping the smile from his face. Now several inches smaller without her shoes, Abby was holding onto him, and her small hand felt soft and warm over his forearm. Even through the material of his shirt, he could tell they’d combust if they ever had any skin-on-skin action.

“And…my work here is done.” Flynn left after nodding at him to look after Abby.

He nodded back before giving her his undivided attention. “You look good enough to eat.”

She frowned. “Haven’t you used that line on me before? Did it work?”

“Dear goddess.” He spread his hand wide, overly dramatic. “I cannot know what is in your mind. I can only offer you my willing sacrifice. Sex to ease the plight of my sick people.” He waved around him for dramatic effect, pleased to see her lips curling into a smile. “You see how they seize and convulse with an unspoken malady. I fear only a sexual sacrifice will cure them. And it must be me, for I am the last virgin in our village of Seattle.”

Abby took a good, hard look at him and burst out laughing.

Maybe she was a little more than buzzy after all.

But before he could ask her if she was okay, she tripped over a heel and fell into him.

He grabbed her without thinking and swore when her rockin’ curves hit him in all the right places. She fit snugly between his legs. Her breasts smashed against his lower chest, while her head rested against his pecs. His nipples had never been so sensitive before, but he swore he could feel her breath against his skin as she blew out a laugh.

“See? Those heels are cursed.”

Cursed, blessed. Whatever caused her to rub against him without backing away, he was all for it. Conscious of her bare feet, he knelt to scoop up the shoes, then swept her into his arms.

She let out a small shriek. “What are you doing?”

“Taking you someplace where we can talk. The noise is getting worse. Too much bass.”

“Not enough, I’d say,” she argued, likely just to be contrary. She held onto his neck and didn’t protest his hold. “There’s a table over there.” She nodded to the far corner, a spot partially blocked from view by the large potted ferns providing a bit of atmosphere. The spooky corner seemed too far away to be a part of things, probably why it remained empty.

Brody walked with her to the spot, nodding at his friends as he passed. Flynn gave him a thumbs up and swept Maddie around, so the woman didn’t see him carrying the tiny goddess away. Tipsy or not, Abby was going straight to his head. He’d had one beer and one beer only; his every intent was to get drunk on Abby tonight.

Not only did she look good and feel good, but she smelled like heaven. Some sultry perfume he’d never scented on her before. Then he looked down and saw her breasts pressed together, that gorgeous cleavage all but begging him to get closer and nuzzle. She toyed with the hair at his nape, and his arousal skyrocketed.

He set her down at the table quickly before taking the seat next to her.

“Hey, I can’t see the dancing.” She tried to lean around the trees.

“You’re not supposed to.” He scooted closer and turned her chair, forcing her to face him.

“Is this a kidnapping? You going to tie me to train tracks any time soon?” she asked with a grin in her voice. Definitely punchy, but not quite drunk.

“Maybe.” He wouldn’t mind taking her back to his place and tying her up in his bed. But that would have to wait, unfortunately, until she could walk a straight line.

“Yeah, right.” She tapped her fingers on the table and studied him. “You do look good in black.”

“Thank you kindly.” He moved his chair closer, spreading his legs to accommodate hers between his knees. He put his hands on her thighs, which were bared nearly to her crotch. God, talk about heaven and hell in the same instance. Abby had creamy thighs, not as toned or muscular as her roommates’, but with shape. That word lush came to mind again. He wanted nothing more than to spread her legs and shove his face into the sweet spot just—

“Yeah, black. All dark and gloomy. Goes well with your hellhound. Where is he, by the way?”

Was she wearing a thong? Maybe nothing at all? It suddenly felt unbearably restrictive in his jeans. Way too tight. Before he gave in to his inner urgings, he shifted his itchy hands away from her dress toward her knees, where he held on for dear life.

“Brody? Or should I call you Black Bart?”

“What?” He pulled himself from his fantasies and concentrated on what she’d said. “Oh, Mutt? He’s back at my place sulking. He really likes you, you know.”

She bit her lower lip, and he wanted to smooth the sting with his mouth. Lick her all better.

“Was I too mean last week, do you think?”

She put a hand on his chest and spread her fingers. Her gaze moved from his eyes to his mouth, and to his extreme satisfaction, her breathing increased. Good thing they remained in public. If he’d been at home with her, he might have said screw morality. Hell, it was all he could do to keep his hands frozen on her legs. Her warm, silky legs.

“I, um, to him.” She swallowed loudly and seemed to lean closer. “Oh shoot. Why not?”

He hadn’t been prepared for her to take charge, so he nearly lost his balance when she yanked his mouth to hers. Instinctively, he clutched her thighs to steady himself.

And then her mouth was over his, and he forgot about the party, the costumes, his name. Soft lips tasting faintly of liquor caressed him and turned him into a man with no other purpose than to claim what he needed. And to hell with everything else.

Which he would have done, if the woman in his arms weren’t Abby. He let go of her to grip the bottom of his seat, determined to do the right thing, even if it killed him.

She pulled back, and he saw the heat he knew raged within his own eyes.

In a gruff voice, he said, “You’re drunk. But I’m not sorry about the kiss. I’ve been waiting for that.”

“Not drunk enough, because I felt that to my toes,” she rasped.

He clutched the bottom of the chair so hard his fingers hurt. “You’re killing me, baby. We should probably get back to the others and—” He sucked in a breath. “What the fuck are you doing?”

This book involves a charmingly sexy plumber, a slightly neurotic writer, one God-ugly dog, a crafty six-year-old, meddling family, a tragic past, card cheats, and some wily action between the sheets–compliments of two people fighting against falling in love. 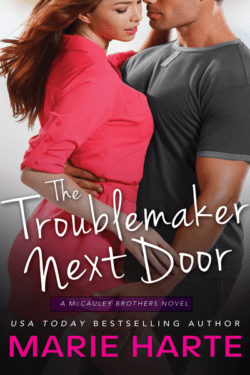 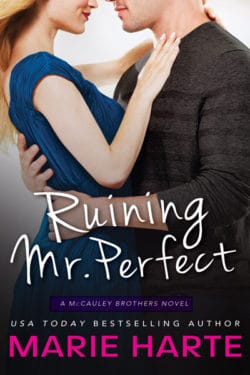 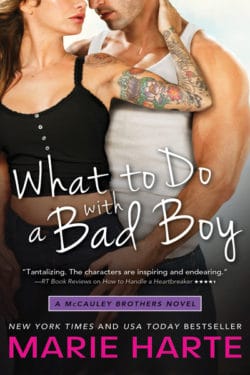