Now FREE through October 13th! Check out the Enjoying the Show, the first book in the Wicked Warrens series.

Get your FREE Amazon read today! 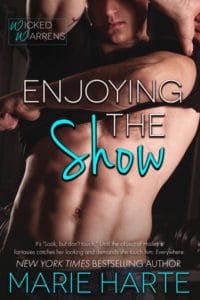 An excerpt from Enjoying the Show.

Checking her watch for the fourth time since she left work, Hailey Jennison floored the accelerator of her overworked Celica and snagged the last available parking spot in Block D of the Abberwick Apartments. Shoving the gear in park, she shot out of the car and up three flights of stairs, thanking the cloudless night sky for what promised to be one hell of a night’s entertainment.

Panting, she reached apartment 306 and glued her finger to the doorbell, practically tripping over Faith when she suddenly opened the door.

“I’m here, I made it. What did I miss?” Hailey rasped as she entered, her eyes slowly adjusting to the darkness of the living room. Giving herself a minute, she gradually made out the ring of chairs facing the large, streak-free window in Faith’s spacious living room.

Three of the four chairs were already occupied. Sydney, Beth and Amy turned as one to glare at her.

“Do you mind? He just sat down to dinner.” Amy grabbed a handful of chips and began munching.

Hailey’s excitement plummeted. “Dinner? I almost killed myself for dinner?”

“Relax.” Her best friend Sydney smiled and patted the chair next to her. “So he’s hungry today. It’s Friday, he deserves the break. Besides, if I’m not mistaken, he looked particularly sweaty earlier.”

“He did. I saw him as I was walking upstairs,” Amy chimed in, giddy as a schoolgirl.

Faith dragged another chair to join her friends; the addition of her seat effectively sandwiching Hailey between her and the window. “I still say this is tantamount to stalking.”

“Stalking? Please. All the man has to do is shut his curtains,” Sydney muttered around a chicken wing.

“I think he likes the attention,” Hailey offered. Hell, she looked forward to rushing through Friday night traffic to join Faith and the others for their own private show. “Besides, do you know how much it costs to rent a stripper these days? And I mean a good one, one who doesn’t stuff his Jockeys and who isn’t gay?”

Beth nodded. “Seventy-five an hour.” They stared at her, and she shrugged. “What? My sister just turned forty, and she’s been divorced twice. I bought her some quality fun, so sue me.”

“The point is,” Hailey continued, grabbing a pretzel, “that most normal people don’t wander around their house naked with the lights on at night unless their drapes are closed. Hell, I live next door to Ethel and Gertrude—”

“—the pie ladies, and I still close my blinds before I hop into the shower or wander around the house in my undies.”

“But you’re a prude.” Amy shrugged.

“I am not.” Hailey took offense, hearing the truth she wished was anything but.  She wanted to say something vulgar for the sheer hell of it, to prove to Amy how much of a prude she was not, when Mr. Tool stood and stretched, distracting her. “Come on, baby, give us a show tonight.”

Faith sighed, and the women crowded noticeably closer to the window.

“I think he looks tired, don’t you?” Sydney asked. “I mean, imagine lugging nail guns and drywall around all day long in the summer heat. He’s got to be beat.”

“Yeah, but look at how toned he is from all that work.” Hailey stared with admiration at the man who haunted her dreams. “So have we found out who Mr. Tool is yet?”

“Gage something.” Faith popped the top of a soda can and slurped. “I finally bumped into him and knocked his mail to the ground. I didn’t see a ring on his finger.”

Beth snorted. “As if that means anything.”

“Yeah, but in the past three months, have you ever seen him with a woman at his place?” Hailey asked, waiting on a breath for the answer.

Hailey sat up so suddenly she nearly kicked her chair out from under her. “What?” she shrieked.

The man across the way paused as if he’d heard them, and they froze when he looked out his window.

Short black hair framed a masculine face full of sharp angles and jagged planes. His chin was firm, his nose strong and straight, and his lips, God, his lips were full and pink and prone to curl wickedly when he was amused. He wore a pair of jeans slung low on his hips and no shirt. The light in his place showed his hardy eight-pack dusted with black hair, and Hailey imagined that hair would feel as soft as down.

Damned if she wasn’t turned on just from looking at him. Of course, the memory of his naked body was enough to set her scorching. They called him Mr. Tool because he worked construction, but once they’d seen said tool, they’d kept the name in deference to his massive hammer.

She wanted to fan herself and eagerly watched him stretch and unsnap the top of his jeans.

For more information on the Wicked Warrens series, click here.