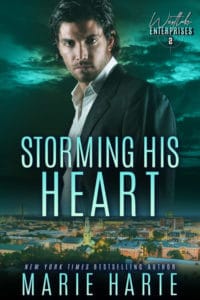 Storm Buchanan’s talent for mind control comes in handy as an investigator for a private agency, but it’s hell on her love life.  Men bow to her every whim, so there’s no challenge.  Where’s the fun in that?

Maybe that’s why she can’t trust herself around Rafe Savage. The smug, sexy, annoying investigator for a rival firm is the one man who seems impervious to her power. Worse, when he kisses her, she all-too-willingly slips under his control.

Rafe’s gift for seeing the future doesn’t usually blindside him…until it comes to Storm. The beautiful seductress assaults his control on all fronts, and the spontaneous flashes of her life in danger have his every instinct on alert.

When attempts on both their lives escalate, Storm and Rafe must stick together to find a madman bent on vengeance. While it’s no surprise that their enforced proximity has their bodies going up in flames, neither expects lust to melt into love. Or that they’ll need every ounce of their combined skills to fight for a future that could die before it’s born.

Warning: Beware a heroine with mind control, a sexy hero with attitude, annoying siblings, smug psychics, danger, and a psychotic villain who can’t be caught.

*This book has been previously released and has been reedited and given a new cover.

Storm spotted the study door and hurried. A glance at the bedside clock showed she was running out of time. She dragged her shoes with her, careful to leave no evidence of her presence behind.

Using the codes Thorne had also appropriated from Locklen’s mind, she unlocked the door and entered. The light from the bedroom illuminated the moderate space. She noted the shelves of old books, nautical charts and antiques encased in glass. And there, atop his large mahogany desk, a wrought iron statue of Captain Michael G. Locklen, founder of the family’s dynasty. That statue meant the jewels were close.

A sudden bang made her jump. Outside, the wind shrieked and blew a tree limb against the study window overlooking the back gardens. With her luck, the power would go out. Not needing more of a headache than she already had, Storm closed the heavy drapes and the study door before turning on the desk lamp. Shadows darkened the corners of an already dim room, but she didn’t dare expose herself with more lighting.

In this room, Locklen relied on simple locks to secure his valuables. His antiquated security matched the aged valuables he held dear. She made short work of his desk using a lock pick she’d hidden in the heel of her shoe. A search through his things turned up nothing. She tapped her foot in frustration.

“Where are you?” The statue was here; therefore, the jewels had to be here. She looked again around the room and noticed an antique lamp standing over a plush leather reading chair. It was hard to see since the desk light didn’t illuminate much more than the top of the desk.

Storm approached the lamp for better study. She still didn’t want to turn on the main light on the off chance one of the guards patrolling outside the house might notice. And then she saw it. A sparkling, emerald necklace atop the lampshade, right in plain sight. From a distance it had looked like part of the lampshade’s decoration. Relieved she’d finally found it, she reached for the necklace.

“Move and you’ll be very sorry,” a voice whispered in the darkness a split second before someone yanked her back against a hard frame and covered her mouth with his hand.

Storm froze. She didn’t necessarily need to see this intruder to get him to bend to her will, but eye contact always strengthened her bond. She struggled to get free.

“Don’t scream or I’ll gag you,” he threatened and released her mouth, keeping his hand close should she try to yell.

“I don’t know who you are, but I’m sure you don’t want me,” she whispered, her voice smooth, like the deceptive calm before a hurricane. She concentrated on an image of herself walking out of the study. “Why don’t you just let me go and I’ll forget you were ever here?”

The arm around her tightened—not what she’d expected. He secured her hands behind her back with a speed that betrayed expertise then turned her around. Unfortunately, she could see nothing of his face through his ski mask but brown eyes and a firm mouth.

Those eyes… Damn it. She knew those eyes. Her own widened. “You were at that bar trying to steal my witness three weeks ago,” she said, wishing she didn’t sound so breathless.

“Whose witness?” he drawled, humor in his deep voice.

“Who areyou?” But she knew. Just her luck that of all the agents she might have run into, she had to encounter the one she had nightly fantasies about. Rafe Savage—sexy asshole extraordinaire.

Thorne’s rumor had turned out to be true. Westlake was definitely involved.

Buchanan Investigations was one of two firms of its like—a top-notch investigative service whose investigators possessed psychic abilities. Though their paranormal talents remained fairly secret, the success of the firm did not. The only fly in the ointment was the equal success of their competitor, Westlake Enterprises. It just figured the only man Storm found even remotely interesting worked for the enemy.

“Maybe I should be asking you that question,” he rumbled in a low voice. “You stole my witness, started a bar fight I had to clean up and left before we could be properly introduced. Now you’re here in the middle of my business once again.”

Oh man, Savage was even bigger and faster than she remembered. And just as sexy, something she had no business thinking about with the job on the line.

Now how to distract him until she could collect the jewels?

“I can almost hear you plotting.” He pushed her into the leather chair, forcing her to sit with her hands behind her back, and turned on the antique light. Removing his mask, he studied her as she squinted under the light’s glare. Dark brown hair cropped a face filled with hard planes and a granite jaw, to say nothing of his lethal stare. No two ways about it, Savage was not only tough but incredibly handsome. And he works for Westlake.

It was disgusting how often she had to remind herself of that fact.

“Storm Buchanan. In the flesh. So many times we’ve run into each other, but this takes the cake. You look different tonight.” He ran a gloved finger over her collarbone, eliciting an involuntary shiver.

Storm tried to shrug off the arousing intensity of his touch, both thrilled and unnerved he knew exactly who she was. He’d never before called her by name. “Don’t you want to let me go?” She tried again to command him and had no luck. Strong-willed bastard. She couldn’t see well under the dim light. Was he looking at her face or her figure in the slim-fitting dress? At his appreciative whistle, she bet on the dress.

“Oh no you don’t, sweetheart.” He grabbed something out of his back pocket and bent down in front of her. His lips quirked into a surprising grin. “Much as I’d like to gag you with this, I think it’d do better as a blindfold.”

Blindfold? Shit. He knew about her ability, or at least, he thought he did. Storm didn’t need to see her opponents to manipulate them, but the eye contact helped. To give her an edge, her uncle had insisted they plant evidence to the contrary. She’d always wondered how deep Westlake’s information ran. Now she knew. How to play this off…? “Come on, you don’t need to blindfold me. I already know what you look like. It’s not like I’m going to tell anyone you were in here. If I’m found in here, I’m in big trouble.”

“I know.” He finished tying her blindfold and stood. “The earrings, bracelet and ring are fixed to the underside of the lamp, in case you were wondering.”

“You know, I really didn’t come here for this. But then, I wasn’t expecting to run into you again anytime soon, and what do you know? Fate’s smiling on me tonight.”

She could hear a large smile in his voice, mocking them both.

He continued, “The last time we met, you stole my witness.”

“And the time before that, you left with the files I’d been sent to collect. We’re even.”

Warm breath fanned her cheek and she clenched her thighs, alarmed to feel herself respond.

“Even? I don’t think so. You have a bad habit of turning up in the wrong places, sweetheart.”

Controlling a shiver, she shot back, “Well, sweetheart, maybe you’re the one with the bad habits. Be a good boy and go home. Locklen is mine.”

He chuckled. “You sure you want him? Hell, you can have him. But I’m not leaving until I get what I came for.”

With her eyesight blocked, her other senses were magnified. Storm could smell the sexy maleness of him standing so close, could feel his gaze moving over her body like a lover’s hands. She did her best to deny her attraction, but she couldn’t. For some reason, Savage got to her the way no one ever had. She wanted to strangle him at the same time she wanted to kiss him blind. “Well, why are you here? What do you want?” she snapped.

“What do I want? Hmm, let’s see. I have a beautiful woman all tied up and helpless before me. I also have a bag full of jewels easily worth a cool million. What to do, what to do?”

She gritted her teeth and tried to manage a bit of room between her wrists, made all the more uncomfortable because she couldn’t stop flaunting herself. Every time she shifted, she inadvertently thrust her breasts toward him. Damn it. What had he used to bind her? Would it have been too much to ask for simple rope?

“Good luck getting free. Plastic cable ties are a real bitch to get off,” he answered her unvoiced question with way too much cheer.

“It hurts.” She shifted and cursed inwardly when the dress slid between her thighs, exposing a length of leg from two dangerously high slits.

“Suck it up, princess.” When she squirmed again, he groaned and warned, “You don’t want to do that.”

“Screw you.” Storm was disgusted with herself tonight. Where the hell had her discipline gone? Bound, helpless and incredibly aroused by some arrogant jerk who worked for Westlake, she felt more like an amateur Nancy Drew than a professional investigator. She continued to struggle but stilled when she felt his lips against her neck.

Her stomach clenched, her nipples hardened and the sensitive flesh between her thighs throbbed. Instinctively, she drew back into the seat, away from the danger in front of her. Or was that behind her? Over her?

He whispered into her ear, “Don’t move, my little rabbit. Not just yet.” 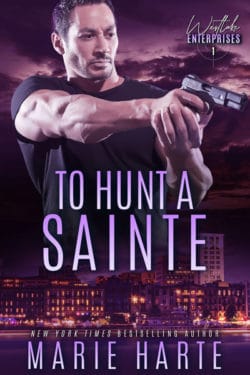 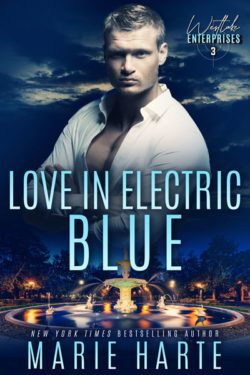