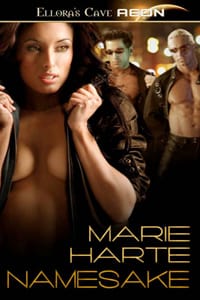 NOTE: The rights are reverting back to me on these books, and they will be released again

In the year 2078, central Kansas is now home to Cross Step, a government bordered area containing strange portals called Voids, which lead to parallel worlds.  Norms–normal people, Voiders–those who came through the Voids, and Conduits–humans affected by the Voids, all live together in Cross Step, segregated from the rest of the world. Vicki Fox is a Conduit, a human with the psychic ability to tap into the energy around her. A mistake at a bar puts her under the scrutiny of one very hungry Ravager, a werewolf-like Voider who likes what he sees.

But Eric isn’t just any Ravager, he’s Prime, the king of his clan.  He takes what he wants when he wants it, and he wants Vicki.  It’ll take more than her sneaking, conniving, and seductive ways to dissuade his interest.  Because in Vicki, Eric and his packmates have something much more precious than a rare queen, but a woman to love forever.

The only noises in the bar to be heard were the clinking of the bartender’s bottles and the slurping, sucking sounds of sex.

“Scotch. Straight.” Weirdest damned night of my life. And I know weird.

The waitress nodded and left. To Vicki’s relief, conversations resumed. Keeping her head down but her energy at the ready, she decided to wait it out in here as long as she could. Once Chen’s people and the Salinas had time to breeze by, she’d leave. Preferably out the back door.

A beer plunked down in front of her.

“Thanks, but I ordered a Scotch…” She trailed off as four men surrounded her small table.

“You’re new,” the tallest one said.

Vicki nearly swallowed her tongue. Nearly six and a half feet of pure menace studied her like a hungry wolf. Jeans, biker boots, and a black t-shirt clung to him like a second skin. He had ice blue eyes, cropped black hair and an attitude proclaiming him king of the mountain.

His buddies looked just as fierce. Like the rest of the Ravagers in the place, they had a wild, earthy quality. The men flanking the leader had short brown hair and brown eyes that studied her with intensity. The one on the right didn’t smile. His eyes darkened as he stared at her. The one on the left looked like a charmer as he assessed what he could see of her past the tabletop. He grinned and rumbled something she couldn’t decipher to the fourth man furthest from her.

The lone blond nodded. “She’s definitely sitting at our table.”

“Sorry.” Vicki stood to leave and the four took a step closer.

Before she knew it, they’d moved the chairs and table out of the way. Nothing stood between her and them but a few feet of empty space. And no one around them seemed to care.

The tallest one held her beer out to her.

“You know what? You keep it,” Vicki said. “Again, my apologies for taking your table.” She met his gaze before realizing her mistake. Shit. Never look them in the eye. Not unless you want to lose a limb. She quickly glanced away.

“Our table. Right.” The blond cut off the small space between him and the wall she’d been eyeing. Her one avenue of escape now denied.

“Um, guys? You’re kind of crowding me.” One Ravager she might be able to handle. But four that looked like these predators?

“Good.” The charmer winked. “My tall friend here is Eric. I’m Logan, the pretty one.” The others snorted. “This is Jesse,” he said of the intense brown-haired male next to him. “And the blond is Dominic.”

She puzzled over the introductions. Maybe they didn’t mean to be so threatening?

“And you are?” Eric asked, the rumble of his voice vibrating along her nerves like a physical caress.

Squelching the urge to shiver, she answered, aware of his knowing gaze. “Vicki.”

“Vicki.” He savored her name. Heat licked at her womb. “How did you get in?”

“Ah,” she paused, wondering if she should tell the truth. “I, well…”

The front door burst open to admit Salinas like invading ants. The minute the lawmen understood they’d busted into a Ravager hang-out, they tensed and drew weapons. Everyone in the bar froze. “We don’t want any trouble here. We’re searching for a young woman, five foot nine, long black hair. Yellow eyes.”

“We seen that here?” the bartender asked.

Everyone around murmured denials, no love for the Salinas a common thread among Voiders.

Surrounded by four giants, Vicki felt safe enough from prying eyes. Hell, if everyone decided to screw the Salinas by withholding information, so much the better.

She let out a relieved sigh, then noted her four new friends staring down at her with calculating expressions. “What?”

“Your eyes are unique, Vicki,” Eric said in a low voice. He cupped her face, his callused hands warm against her skin. “Salinas,” he said over his shoulder. “Why do you want this yellow-eyed woman?”

“Mister” Chen. Great. My luck to get the Salinas on Chen’s payroll. Some in the crowd chuckled while others began talking in louder voices.

“What’ll it be, Vicki?” Eric murmured.

“Be?” Damn him. She had a bad feeling he was offering a choice she didn’t want to make.

“The Salinas or us?”

By us, did he mean…? All four of the men surrounding seethed with energy. She could feel the arousal in each of them pulsing like a living thing. The “us” definitely meant all of them, but Vicki didn’t have a choice. No way in hell could she go with the Salinas, especially if they meant to send her off with Chen. With these guys she stood a chance—granted, a slim chance in hell—of escaping intact.

“Damn it.” Vicki seethed, annoyed their arousal was stoking her own. First Chen, now Ravagers? Is this my night for Voider love or what? Swearing under her breath, she yanked Eric to her. Forcing him to bend to meet her mouth, she gave him her answer.

“Nobody here by that description, Salinas,” Dominic yelled. “Now get the hell gone.”

Other Ravagers seconded the sentiment.

Not sure if they left or not, Vicki tried not to succumb to Eric’s wild taste. Basic need, raw sex and a rock solid body pressed against her took a huge chunk out of her resistance.

He growled and pressed her hard against the wall, no longer accepting her kiss so much as taking charge of it… 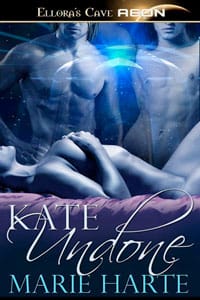