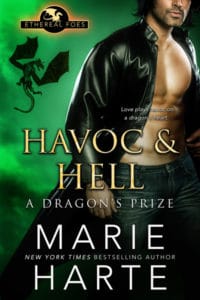 Demon James Sinclair is paying for a prank gone wrong. His father, ruler of the lower realm, demands he offer ten days of servitude as payment to the dragon prince, Teban — James’s best friend.

That light a sentence has to have a catch, so James does what any good demon would do. He runs. In an attempt to avoid Teban, he falls prey to a pretty woman with sharp teeth. Problem is, she’s havoc – a race of creatures even demons and dragons fear. But what starts out as torment turns into delectable sin. James has no intention of leaving when the dragon prince and the havoc seductress join forces to make him pay. No vice is too addictive, no demand too brutal when it comes to finding his heart’s content.

Until those blasted angels arrive for some payback. Soon James’s prank has unintended consequences that might just kill him, or start a war to end the world. Forever.

James awakened to someone shaking him, digging sharp fingers into his open wounds.

“Mistake,” he managed, as his vision focused once more.

The girl had vanished. A woman now gripped him. She looked enough like the girl to be her mother. Despite his pain, James couldn’t help assessing the female. He had an eye for beauty, and the dark splendor in this female enchanted him.

High cheekbones, full lips and large, expressive eyes a shade of whiskey-brown studied him. She wore garb common to the succubi living in the Abyss. A band of cloth stretched across full breasts, leaving her belly bare, and a low-cut sheath of black silk draped her lower torso, ending at mid-calf, exposing slim ankles and pretty feet. She had dainty claws on her toes, and he had an absurd notion to pet her just to see if he could get said toes to curl.

“Asael is looking for his son.” Her voice echoed around them in several pitches, ripe with power. When she spoke, her teeth remained even, her features surprisingly human.

“Are you havoc?” he rasped.

The woman moved back from him. She crossed her arms over her chest in study, plumping her breasts.

“I apologized to the girl,” he tried again.

In a more normal tone, she said, “My niece.”

Shit. This was Auntie. “I was trying to save her.”

“Demons do not protect their young. You are a demon, are you not? I sense your hellfire, but I’ve never seen blue flame before. What kind of a demon are you, Asael’s son?”

Mention of his father put him into a real panic. Asael is going to kill me when my sways go Undecided. “Look, Auntie, you have to let me go.” Sudden thirst overwhelmed him, and he had a hard time continuing.

“Kihra, if I don’t do my job, Asael’s going to throw me in The Pit. Full of agony, fear and pain—it’s not a fun place.” Understatement of the year. The Pit unleashed the deepest fears in any who entered it. A true hell no one in this realm found anything but torturous at best.

“Sounds fascinating.” The darkness in her smile captivated him. She shifted, and her black skirt rippled around her like dragon wings. An image of Teban came to him so unexpectedly he tensed in confusion, aggravating his injuries. “Well, you interfered with Naya’s kill, but your capture has proven she has enough skill to come into her own.”

“Wonderful. Glad I could help.” His vision grayed again.

When he opened his eyes, he stared at the bloodred sky above. Kihra leaned over him, blocking out a black orb—the Abyss’s version of a setting sun. “You’re beautiful,” he said on a croak, meaning it, and realized she’d removed his bonds.

“Ah, right. So you’re letting me go?” He rubbed his wrists, not surprised at the blood seeping from the raw skin.

“After we complete the sacrifice.”

“You are on sacred lands, Asael’s son.”

“James.” His name sounded musical on her lips. “You cannot leave until the rituals have been observed.”

“Rituals.” The damn woman looked excited about the prospect. Apparently, the havoc were as primitive as he’d heard. Demons hadn’t celebrated blood sacrifices in centuries, not since Asael had taken charge. Even the dragons had let go of the proverbial roasted virgin.

“Look, Kihra, my being here is a complete accident. I followed the wrong directions and ended up farther from Baphomet Falls than I’d intended. I’m still not certain how I crossed into havoc territory.” According to what he knew, havoc territory lay several leagues beyond the fields of the blood elves. He couldn’t possibly have teleported that far.

“Perhaps Kingu intended you to come.” Her eyes blazed, a golden fire that provoked unwilling lust from his sore body. An erection swelled despite his desire to leave this cursed place.

Who the hell was Kingu? And why did Kihra’s eyes suddenly resemble those of a cat…or dragon? Alarmed, James felt his cock pulsing in response to her feminine hunger. Not empathic by any means, James had never before felt another’s passion. He could only assume the havoc possessed such a gift. Yet her hunger might not be of the sexual variety, but of a visceral one. Her niece’s sharp teeth came to mind.

“When you say sacrifice, what exactly does that entail?”

Before Kihra could answer, a familiar rumble interrupted them. Thank the damned.Teban.

A large green head with tight, flat scales appeared around a cluster of gray rock. Teban’s red eyes glittered with rage as he sniffed loudly in the stale air. Twenty-five feet of angered dragon bounded around stacks of bones. His gray-green wings flapped with agitation, knocking down several of the bone markers around them.

Teban looked from her to James and back again. In an instant, a tall, naked male with wings replaced the fire-breathing beast. “James, I trust you’re okay?”

“Glad to see you, buddy.” He winced at Teban’s toothy grin that didn’t reflect joy in the slightest. “I’ve been better.”

“That’s too bad. But I’m glad to know it was injury that prevented you from making good your debt to me, and not that you were intentionally trying to weasel out of repayment.”

A sardonic lift of brow told James the blasted dragon knew exactly what he’d been up to.

“Save your breath.” Teban’s fake grin turned into a scowl. He turned his gaze to Kihra and a true smile returned. “And just who is this?”

“Kihra, a vision of loveliness, to be sure.” Teban took her hand in his larger one and kissed the back of it.

“Ah, hurting down here,” James reminded his friend, only to be ignored.

“Kihra, you aren’t demonic, are you?”

She shook her head and smiled shyly. Shyly? “I am havoc, great prince.”

Oddly, James had entertained a few carnal thoughts about his friend, though his tastes normally ran toward women. Perversions of the flesh enthralled him, especially when he introduced pain into the mix. Giving or receiving from his female partners didn’t matter. A consensual mingling of pleasure and sin turned him on like nothing else.

Watching his friend and his new tormenter interact had him harder than a pike, in lust with…both of them?

“What infraction has my slave incurred, pretty Kihra? I would see that you’re recompensed for his insult, that I might take him home to recuperate my own losses. The boy owes much to my kind.”

“Boy? Losses?” James stirred himself to glare at his giant “protector.”

“You lied to me, demon. Therefore you must pay.”

Guilty. James tried not to but felt his face heat. So he’d told a fib or two. The prank had been well worth it. After stealing a precious dragon egg—an egg that had come to no harm—he’d set up the angels to take the blame, and in the process started a small war between the upper realm and the dragons. Priceless. Even his father, the great fallen angel Asael, had found humor in the situation.

Privately, Asael had patted James on the back for a job well done. But to keep the peace, to those James and his twin had offended with the prank, he’d offered justice in the form of their servitude.

“Fine. I’ll pay. Later.” James tried to sit up but felt lightheaded and remained firmly on his ass. “Can you take me home?”

“I would, but you’ve offended the havoc.” Teban continued to hold Kihra’s hand, now stroking it with his thumb.

“Yes, and so he must pay the price. A great sacrifice is needed.” Kihra tugged Teban with her to a large, flat, centered stone.

James glanced around, unnerved to find himself on the outer ring of what appeared to be a ceremonial site. The slab Kihra brought Teban to looked like an altar.

“I offer myself in place of the idiot demon,” Teban said.

“Shut up.” Smoke curled from Teban’s nose before he turned back to Kihra. “Will my willingness suffice?”

“Oh yes, great prince.” Kihra looked positively thrilled as she looked Teban over from top to bottom, focusing on that impressive and growing shaft between his legs. James snorted. Trust Teban to get off on being told he was about to die.

The female pulled a long, slender knife from out of nowhere and whipped it under his throat. 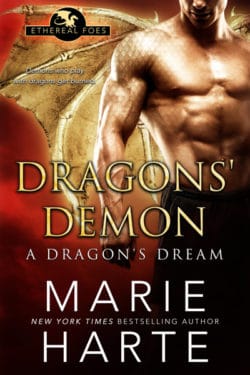 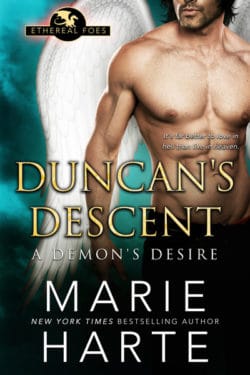 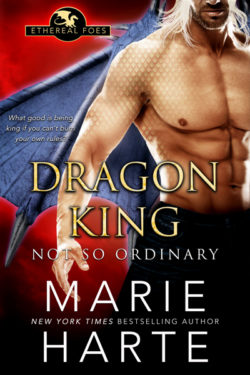