It’s “Look, but don’t touch.” Until the object of Hailey’s fantasies catches her looking and demands she touch him. Everywhere.

Hailey Jennison is smart, funny and, unfortunately, stacked. She hates the male attention she gets. Socially awkward, she keeps to a safe, boring routine. Entertainment comes in the form of a little harmless
voyeurism, watching the living, breathing sex god across the quad parade around his apartment half-naked.

When Gage catches Hailey watching him, he has no intention of reporting the sexy peeper. For he’s been watching her, too. And he has plans to fulfill her every desire.

“I’m sorry, but I think you have me confused with someone else.”

He narrowed a gorgeous, steel-gray gaze that made her womb clench and frowned. “Honey, I don’t think you understand. Apartment 306? Faith Sumner ring a bell?” Crap, he did know about Faith and where she lived. “Now we can discuss this here, with an audience.” He nodded to several people laughing as they crossed the parking lot. “Or we can go somewhere private and discuss the matter…without getting the police involved. Frankly, I’m tired of being stared at.”

Crossing his arms, Gage looked completely menacing, and mouthwateringly real. Without the distance separating his apartment from the Friday night shows, Hailey’s normally nonexistent sexuality kicked into overdrive. Good lord, but this man was even making her mouth water.

She eyed his irritation, figured what she knew about him after several months of observation, and knew she’d never get another chance to be this close to the object of her fascination.

Nodding, she let him drag her the distance to his apartment, not wanting to appear eager. But as they drew closer to his place, she wondered at her sanity. He’d seen her watching, knew all about Faith and her friends. Why the hell was she going to entertain his questions? Then again, considering the alternative he gave her was to talk to the police, she had no choice but to take him up on his offer to discuss matters privately. With any luck, Sydney would spot them walking the distance to his wing, or better yet, see Hailey in his apartment and race to the rescue.

Unfortunately, Hailey’s worries paled next to her sudden, combustible libido. God, being so close to him was like walking in a wet dream. His rock hard body enticed, demanding adulation. And not wanting to look directly into his burning gray eyes, she was more than happy to focus on his broad shoulders and sculpted delts, his corded forearms, and especially on the taut ass encased in those jeans.

She followed him up the stairs, her gaze helplessly drawn to his powerful thighs. With some difficulty, she swallowed around a dry mouth. She still couldn’t believe she was accompanying her fantasy man back to his apartment. Sydney would be expecting her back with the booze, and instead Hailey walked behind Mr. Tool, caught in a firm grip promising retribution.

At his door he paused, his eyes darkening with menace. Instead of appearing scary, he only looked sexier. “Wait right here. You move one step, I’m calling the cops on you and your peeping friends.”

Frozen, she nodded and waited. As if she had a choice in the matter. She could just see her name plastered over the local news. Dull and prudish Hailey Jennison caught peeping at hard-working, blue-collar stiff. At the word “stiff” she inwardly groaned. She did not need to be focused on sex around an angry, half-dressed Adonis who didn’t seem to have a woman on the horizon.

He jerked his door open and pulled her inside, locking the door behind her. From what she could see through dimmed lights, he had a nice, masculine place. Up close, his apartment had more charm than she’d seen through his windows. White-washed walls framed a spacious apartment with brown leather furniture. He had oak hardwood floors, dark cabinetry that looked extremely expensive and definitely hand-crafted. His small kitchen was bright and cheery, with an apple-green tile backsplash against white cabinets. No dishes cluttered the sink, and the rest of his place looked tidy, as if he’d recently cleaned.

“No need to give your friends more of a show than we have to,” he said in a gritty voice.

She whipped her head to him, studying him warily. What the hell had she been thinking? She stood alone in an apartment with a virtual stranger, one who seemed in a pretty fierce mad as he glared at her. He towered over her, his muscles clearly outlined in the soft lighting of the room. She took a cautious step back, aware he’d locked his door, and swallowed loudly.

Seeing her fear, his scowl deepened.

Anxiety flared. What did she really know about Gage? He worked in construction, put in a full day’s work, and didn’t screw around, or at least he hadn’t for the past three months. He apparently liked porn—she still had a bone to pick with Faith about that—and despite leaving his curtains wide open at night, had issues with being spied upon.

He took a step closer and surprised her by sighing. “Now, Hailey, why don’t you tell me what you’ve really been doing in Faith’s apartment every Friday night for the past few months.” He walked toward her and she froze. He mumbled something under his breath, and her gaze followed him as he walked around her to his door, then leaned back against it, blocking any chance at escape. His muscled arms crossed over his massive chest, and he stared at her with an intensity she found unnerving.

“How do you know my name?” And how did he know about Fridays at Faith’s? She stalled, trying to think of a way out of this mess. It was one thing to fantasize about doing a guy this hot, but another to actually do it. Should she apologize nicely, flirt, or maybe offer some kind of financial restitution?

He smiled, a lazy grin that widened as he glanced from her eyes to her mouth, and lingered over her breasts. “I know a lot about you, Hailey. I know you used to live in Abberwick before you moved across town. I know you’re good friends with Faith and your three other pals, the women who hang around Friday nights watching me.”

She flushed at the accusation in his tone. “If you didn’t want to be watched, you should have closed the curtains.” A pitiful defense, but it was all she had.

“Tsk, tsk.” He shook his head. “Never admit to the crime. And especially not to your victim, unless you mean to make things right.”

“Look,” she began in a shaky voice, “I’m sorry if you think I did something you object to. You’re a good-looking man. And if I happened to glance at you a time or two through Faith’s window into your brightly lit, exposed apartment, I apologize.”

He grinned, and her heart raced like she’d run a marathon. God, why couldn’t he be an arrogant jerk with no sense of humor? Her fear faded as if it had never been there, and suddenly her sex drive shot into high gear, shocking the crap out of her.

“Hailey, you have one hell of a fire in those hot, whiskey-brown eyes.”

Sure, but have you ever looked into her eyes? Frigid bitch, resounded in her thoughts, and she wondered how Gage saw her as someone so different from the woman her coworkers saw on a daily basis.

“I think you’ve made a mistake, Mr., ah…” she paused, waiting for him to fill in the blank. When he continued to grin, his hungry gaze wandering over her body, she froze him with the look she regularly gave Eddie at work.

Unlike Eddie, however, Gage didn’t frown or glare back in disgust. His mouth quirked at the corner, and to her bemusement, she had an almost irresistible urge to kiss him there.

“My name’s Gage. And if you want to know my last name, you have to take me to dinner.”

“Take you to dinner?” she repeated blankly.

“Save it.” He held up a callused hand. “Dinner or jail? Your choice, sweetheart.”

Sweetheart? The annoyance she should have been feeling at the inappropriate pet name was smothered under another wave of lust. On his lips, the endearment sounded like a come-on. One she was all-too-willing to hear all over again.

What the hell am I doing? He’s locked me in his apartment, and now he’s blackmailing me into dinner? That or jail? Is this how he gets all his girlfriends? A glance over his superbly conditioned body made her rethink the notion. And then, to her astonishment, she found herself nodding hesitantly while her mind shrieked at her to say no. 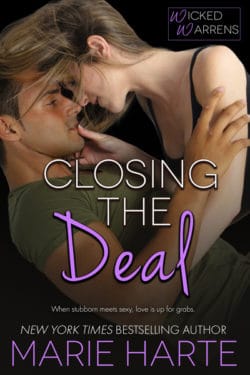 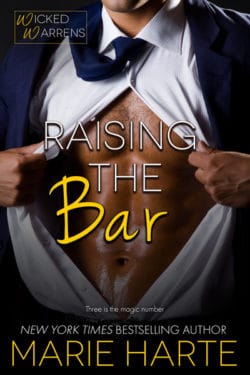 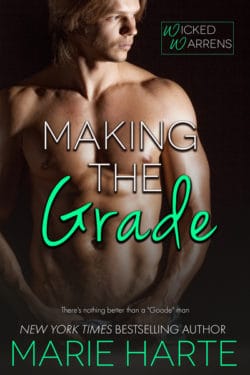 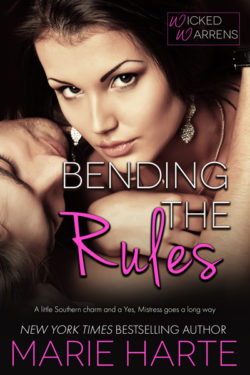