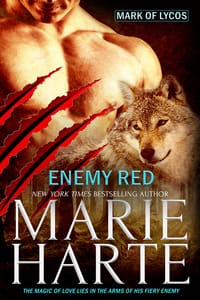 The magic of love lies in the arms of his fiery enemy.

No one likes an arranged marriage, and Fenris, a golden wolf in the Silver Clan, plans to avoid it as long as he can. But the Wolf in the Forest has heard the prayers of another and grants the female her wish.

Unfortunately for Fenris, his destined mate is an alpha in her own right, and an enemy who plans on taking the Silver Clan, and Fenris, apart one bite at a time.

Until Fenris bites back.

Fenris considered his twin with pity and shook his head. No matter how many times he’d urged Anson to leave with him, his brother had sworn he’d convince their uncle—their alpha—to simply let them be. Fenris knew better. Michael Barton, alpha of the Silver Clan, had a stubborn streak a mile wide. Probably why he and Fenris too often butted heads. Still, Anson should have known better than to wait it out.

Come on, come on, he silently urged, hoping no one spotted him. He’d be damned if he’d agree to this mating nonsense. Finally, Anson turned and looked directly at him. Fenris motioned for his brother to join him until he saw the anger on Anson’s face…directed at him.

“Hell, no. I’m not taking the blame for this. I warned you Uncle Mike wouldn’t give in. You’re on your own, bro.” Fenris shot his brother a one-finger salute and ran like hell into the woods before his uncle set the wolves on him. He’d been planning this escape for days. Since Anson refused to listen to reason, he’d have to make his own way through that hellish ritual.

With a relieved sigh, Fenris released his hold on his human form and slid into the bones and sinew of a large wolf. Relishing this bid at freedom, he ran with the Wolf in the Forest–the great spirit that made life possible for his kind. Faster and lighter, he raced on all fours, scaring rabbits and squirrels from their cover amidst the thick evergreens in the forest.

Fenris ran across rich, black dirt, gnarled tree roots and the occasional poplar leaves drifting to the ground through the late summer air. Birds cawed and bees buzzed, warning him of trouble just ahead. Veering away from two bucks fighting for dominance, he settled into an easy pace to loosen his stress and simply enjoy being wolf.

In the distance, he heard booms and snarls, the sounds of sacrifice made and accepted, before the Wolf in the Forest replaced such noise with a swift and invigorating breeze. He thought of his brother with a wistful fondness. Wishing you wind-speed, Anson. For when I see you again, I have a feeling we will both of us be changed.

Caught in the gentle rhythms of the forest, Fenris continued to run. He put as much distance as possible between him and that farce behind him. He still didn’t understand why his uncle thought it best to find him a mate, now.

Hell, Fenris had only just reached his twenty-fifth year. Most males didn’t mate until well after their first or second century of living. And since once mated a wolf couldn’t stray, most wolves did their level best to fuck anything that moved before being tied down to one partner. He wouldn’t have minded some alone time with Sherri and Sophie again. The last time he’d played with the pair he’d come all night long. Sherri had oral skills that put most wolves to shame. She’d swallowed more than one load, while Sophie played with every part of him she could reach. The pretty little silver wolf liked it rough, and he’d been hard pressed to hold back. Thank the Wolf neither of them had been in heat. Oral, anal, they’d gone every which way and left him happy and exhausted. Problem was, his uncle wanted him to settle down. To have pups and ensure that his line continued well into future generations.

Shuddering at the thought of being bound to one wolf forever, Fenris increased his speed. He knew his uncle would be pissed as hell he’d escaped, but he’d deal with the fallout later. After the ceremony concluded, which would give him another ten years before he had to deal with this shit again.