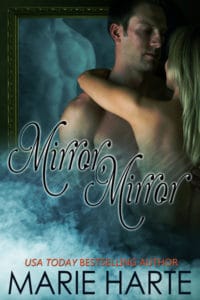 A dare, a ghost, and a spooky invitation spell out one hell of a night for Mandy, Linc, and the Man in the Mirror…
a m/m/f novella

For years Linc Barron’s tried to avoid his attraction to his smart-mouthed friend, Mandy Rovela. He wants her, but more, he’s in love with her. And it’s high time he does something about it. So he makes a wager she can’t resist: she wins twenty-four hours with him at her beck and call–IF she’ll spend the night with him in her grandmother’s haunted house.

Mandy has had the hots for Linc for years, but there’s no way she’s becoming another notch on his bedpost. So she agrees to his stupid wager…for a chance to win his heart.

But the ghost is not only real, it’s also far more than a trapped spirit. Dominic de Sange, the Man in the Mirror, is an earth mage who needs sex to gain power. And he’ll use everything Linc and Mandy have to push him back into the spirit realm where he belongs.

“Do you really think one night in this place is going to scare me? I spent summers and weekends here growing up, remember?” Amanda Rovela stood with her hands on her hips, wishing the burning attraction she’d always held for her friend, neighbor, and nemesis, Lincoln Baron, would just go away. At least long enough to put him in his place.

His grin made her belly flutter. “Come on, Mandy. Don’t tell me you’re scared to spend Halloween at Nonna’s?” He glanced up at the imposing two-story colonial and uttered a demonic laugh.

She’d never admit it aloud, but she was a bit squeamish about staying overnight on this particular holiday. Hell, even her grandmother Nonna had left, spending the weekend with Mandy’s family across town. All the Rovelas avoided this house like the plague every October thirty-first.

“Who said I’m scared? This house isn’t haunted, and I don’t believe in ghosts. I’m going to win this bet, and you’re going to regret the day you proposed this stupid wager.”

Linc had the gall to laugh. “Baby, I’ll have you on your hands and knees before the weekend’s out.” His gaze took on a sensual glitter that had her doing a double take.

“Excuse me?” Baby? Hands and knees?

“My kitchen’s a mess, and I don’t remember the last time I actually cleaned the bathroom. The floors really need a good scrubbing. I’d do it, but it’s women’s work, you know?”

Mandy fumed. Just wait until she told his mother what he’d said.

As if he’d read her mind, he chuckled. “I’ll just deny it if you tell Mom. She dotes on her boy, so don’t bother.”

And did she. Mandy loved Brenda Baron, but the woman had a blind eye concerning her only child.

“Now, baby, stop stalling and get your cute little ass inside the house.”

“Since when do you call me ‘baby’? I thought that was a term reserved for your sex-starved bimbos who hang around the firehouse.”

“Tsk, tsk. Your claws are showing. Now, are you welshing on the bet or what?”

“I’m going, relax.” Taking a deep breath, Mandy shouldered her overnight bag, walked up the steps to the porch, and opened the door to her grandmother’s house. Going against every instinct that told her to turn away, she walked across the hardwood floor to the staircase.

“Don’t worry, Mandy. I won’t let anything happen to you.”

She spun around in surprise to see Linc standing inside the doorway. All six feet, three inches of tall, dark, and dangerous stared at her with a disquieting silver-eyed gaze.

“What are you doing?”

Her womb clenched. Stop that, she told her body. Have some dignity, some control. Remember who you’re lusting after. “Why are you staying? Afraid I’ll slip out of the house before midnight?”

“Jerk.” This was the Linc she’d lived next to for fifteen years. An arrogant, too-handsome-for-his-own-good playboy. “Fine. But when I win this bet, and I will, I’m going to have you at my mercy for twenty-four hours.” She salivated just thinking about it. She’d find the most menial chores for him to do, scrubbing her floors, doing her dishes, dressed in a butler uniform…or better yet, dressed in nothing at all. Her temperature skyrocketed at the thought.

His knowing glance only increased her frustrated anger, and she turned on a huff and ascended the stairs. She hated looking foolish in front of Linc, hated whenever she lost a contest or bet to him. Because it mattered what he thought of her. They were friends, yes, but not nearly as friendly as she’d like. And God help her for such weak moments of honesty.

Behind her Linc yelled, “Boo,” and laughed when she jumped.

She glared over her shoulder, flipped him the bird — setting off more laughter — and focused on the stairway, putting her mind to rights. She’d been toying with the idea for some time, but the look he’d just given her tipped the scales.

This bet would be the turning point in her relationship with Miltown’s Fireman of the Year, and it was imperative she emerge victorious if she wanted a future with the big jerk. A woman who wanted a relationship with a man like Linc Baron, a man who could have any woman he wanted with the snap of a finger, would have to be two steps ahead of Linc just to keep him interested.

She set her jaw. Ghost or no ghost, Mandy planned to win the stupid bet. Oh yes, she’d get the better of Linc Baron, and God willing, a lot more.