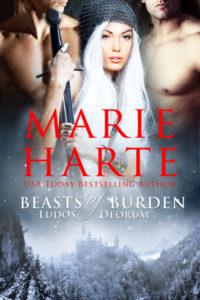 Welcome to the Games of the Gods

Pulling a chariot for the goddess Freya is no picnic, but Hall and Avarr don’t mind protecting her from all harm. They’re waiting because they’ve been promised a rich reward for their loyalty—Eira, a stubborn valkyrie who drives them to distraction. Unfortunately, they’ve been told they can’t have her until they’re ready. And they’ve been ready for fifty years.

Eira is disappointed that Freya’s huge guards are so dull. They won’t fight, they barely talk, and to her knowledge they’ve never used a bow or spear. It’s embarrassing, and such a waste of two such mighty specimens. But when she spies them having at each other, suddenly they’re not so boring. Or embarrassing. They’re freakin’ hot. When they unleash an enormous rage on Freya’s enemies, proving they really are the bad-asses of legend, she’s not sure that boring is bad. Because they’ve set their sights on her. And battle cats have been known to toy with their prey…for an eternity.

Note: this is a M/M/F menage, where everyone is touching everyone. Enjoy!

“Well, well, look what the cats dragged in.” Eira smirked at the pair of huge, stone-faced guards standing off to the side in the main foyer of Folkvang—her goddess Freya’s grand palace. There were marbled tile, gilded moldings, and halls aplenty for drinking, whoring, and fighting. Because anyone who didn’t fight didn’t belong in the godlands.

Life with the goddess in Asgard—the immortal realm—had its perks. Perfect weather, a divine landscape filled with sweet smelling flowers, rolling hills, and enough practice ground to keep the warriors in residence in berserker heaven. Not to mention the muscled eye-candy staring back at her.

Eira should have been ecstatic surrounded by paradise. But for all that she’d never gone hungry, thirsty, or sleep-deprived in Asgard, she’d also never gotten a rise out of Freya’s favored guards either. No joy from Hall or Avarr in five long decades. Damn. She was better than that.

Lowe, her friend and battle companion, nudged her. “Leave them alone. They’re probably tired from pulling that big cart all over the sky.”

They snickered. Freya’s chariot was no mere cart, but to be strapped to such a thing to haul their goddess’s ass around… Embarrassing. Yet who else could pull it? Not Freya’s battle boar. He didn’t have the temperament, or the strength, despite his size. The goddess’s warriors? The shapeshifting falcons and eagles wouldn’t sully their precious talons, and no valkyrie worth her spear would ever consider such a lowly task. Eira sure the hell wouldn’t. Besides, Freya’s battle-maidens had better things to do, like haul worthy souls from the battlefield. Drink, swear, fight…fuck.

She eyed Hall and Avarr again. They certainly seemed built for war. They didn’t talk much, but they looked fierce. Too bad appearances didn’t reflect their true character. They might be strong, sexy, and more than appealing with all that muscle, but they bored her. No fights? No inexplicable rages? No passion?

Such a waste. Both men towered over her, and she was no slight female. They had dark hair and eyes, with square jaws and massive shoulders. Dark trousers outlined their thick muscular legs, and she’d had dreams about those broad chests covered in sleeveless tunics. By Hel’s breath, the golden bands around their arms would nearly fit around both of her thighs. Their hands looked large enough to span her entire head. Yet they’d never held a sword, bow or axe.

She felt sorry for them.

“Do you two ever do anything other than breathe, hunt mice, and pull that chariot around?”

An unfair question, as they lived to serve and protect their goddess. But Freya never used them as more than intimidating bookends, having them constantly escort her immortal tush all over the place.

Like Avarr next to him, he possessed a feline soul. A giant battle-cat the size of two grizzlies. Not a falcon or a boar, but still an impressive animal when shifted. Too bad she’d never seen him fight anything but a harness.

Avarr stared at her, his eyes so dark they looked black. “Little Snow, is there something you wanted?”

“Eira, I’m hungry. Are you coming or not?” Lowe griped. The elfin valkyrie was just visiting before she returned to Midgard, where she normally lived with her mother’s people among the humans. The girl’s blood sugar had been a popular topic of conversation of late. When Lowe grew hungry, she turned bitchy. Then heads rolled, bodies crumpled, and wars started.

As much as Eira loved her warmongering buddy, Avarr’s tone warranted further discussion. She scowled and ignored Lowe’s urging to join the others in the feast hall.

“Fine. I’m going without you.” Lowe left Eira alone with the brutes.

“What did you call me?” Eira asked and stomped to within arm’s reach of them. This close, they made her feel small, an odd feeling for a valkyrie to have. She’d been bred of Odin’s lightning and Freya’s will but born to mortal parents. The heart of gods, the flesh of humans. And now in her prime, she was a warrior strong and true with the muscle and battle sense to take on even these beasts. Her heart raced at the thought, wondering if—how—she’d defeat them if they chose to fully engage.

“I called you by your name,” Avarr rumbled. Eira meant snow in Old Norse. “And you’re little. Little. Snow.” Avarr leaned closer, and she swore he inhaled her and purred.

No. Avarr didn’t do things like that. He had to be teasing her. Another first. Except she found it annoying. She wasn’t little, by any stretch of the imagination.

Hall sighed and crossed his arms over his broad chest, bringing attention to his thick forearms.

“What? Nothing to say, Hall?” she snapped. Her stupid white hair had been responsible for Eira. She’d loved her human parents, but really? Snow? Thank the gods she hadn’t been born with buck teeth. They might have called her Bucky for an eternity.

“Have we caused offense? It wasn’t our intention,” Hall apologized.

As usual, the mere scent of a fight was enough to pull them back from a confrontation. So disappointing.

“Ech. I’ve better things to do than waste my time on beasts of burden.” She sneered, then turned on her heel and left, wishing they’d stop her. Yell at her. Fight her. Something.

As usual, they did nothing of the kind.

She joined her friends in the feast hall, no longer pleased over their earlier victory on the battlefield, and wondered if any of the falcons would object to her using them as target practice for entertainment later. Probably. Birds could be such pussies about losing a limb.

Beasts of Burden previously released in 2014 with another publisher. It has been re-edited but not revised and has the same content as the previous edition. 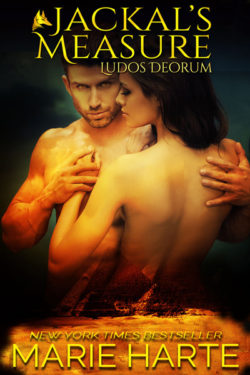