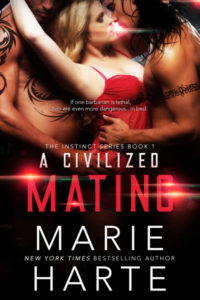 If one barbarian is lethal, two are even more dangerous…in bed

Earther Skye Jones arrives to rescue her friend from a kidnapping, knowing she’ll be throwing away her chances of a dream job on planet Ussed. But with her skills, she doesn’t anticipate being captured by a group of the lethal barbarians. Or that she’ll fall for the sexy squad leader. If that weren’t bad enough, she’s brought back to their encampment, where she meets their clan leader, yet another hulking warrior that sets her blood afire.

When the mating instinct takes over, Skye finds herself with not just one, but two bed partners. Her life isn’t meant to be lived among the uncivilized. Or is it? Before she can decide what she wants, the choice is taken out of her hands by an enemy clan. And if she’s not careful, she’ll lose a lot more than a stubborn heart.

Talzec growled, his gaze still on Skye. “Why are there two offworlders in my camp right now?”

Lisa stepped back behind Maht.

Xav moved to position himself firmly between Skye and Talzec, which had Talzec looking even grimmer.

Suddenly, Skye’s sense of self-preservation vanished as anger at the unfairness and weirdness of the situation took hold. She darted around Xav before he could stop her and walked right up to Talzec, stopping only a foot away.

Jesus, she could feel that intense heat bleeding from his body into hers as his energy sought her secrets. She tried to hold him out while looking for cracks in his psychic shield. She needed to know how he’d react to danger if she had any chance of surviving.

She poked him in the belly and felt absolutely no give in his muscle. Suppressing a totally inappropriate shiver of need, she stood firm. “Look, buddy. It’s been a shitty week, and you’re not helping.” She ignored the gasps of those around her and continued. “Your barbarian stole my friend, sexed her up, impregnated her, and now claims her as his mate. You can’t just steal people. She’s an offworlder. She has rights.”

Talzec didn’t blink as he watched her, and those fascinating golden orbs of his kept flashing to blue and back again. Darts of red swirled, then vanished, while his tattoos moved faster. Totally not human, Skye. Remember that.

“And what of you, little human?” he asked in a beastly growl.

“I’m here to help her. She’s my best friend.” She put her hands on her hips, trying to look bigger and failing miserably under his larger-than-life presence.

“She defeated two Nasuhl warriors. And Maht,” Xav said, startling her to hear him so close behind her. She hadn’t felt him at all, so focused on Talzec.

Talzec frowned, which made him look even sexier—meaner. “An offworld female defeated a Vyctore warrior?” He scoffed, his disdain evident.

She saw red. Without thinking, she tapped into his energy and forced him to step closer with a telekinetic tug. Then she hooked a foot around his ankle and yanked.

A normal man would have fallen on his ass. Talzec stumbled and immediately caught his balance.

“I told you,” Xav said and laughed at the giant tower of rage now looming over her.

Talzec leaned down and opened his mouth to say something. Then he sniffed and froze. His head whipped to Xav, who nodded. Straightening to his full height, he ordered Xav to take her to his quarters.

“To my hut?” Xav sounded surprised. “Not the guest quarters?”

“Do what I told you to.” The quiet threat in Talzec’s tone said more than a shout could have.

Whispers around them turned into loud discussions of shock and awe that an offworlder had dared confront their leader. “Maht, you and Lisa come with me.” He turned on his heel and walked away.

Xav hustled her with him, so that she almost had to run to keep up. They entered a hut on the far side of encampment, right next to a larger structure that held a banner over it signifying the leader’s home. That much she knew from her studies of the barbarians.

Great. She’d now be sequestered right next to a giant with a chip on his shoulder about offworlders.

Inside the hut, she saw open windows facing the forest. A large pallet on the ground made up of furs and skins took up most of the room, with a wooden cabinet to one side and a table and chairs on the other. Large by her standards, but small when occupied by a barbarian. The place was simple but clean, and it smelled sweet, probably from the yellow blossoms dangling on the vines right outside the windows.

She’d barely stepped inside when Xav grabbed her and dragged her down under him on the pallet, which was surprisingly comfortable.

“Hey, stop.” She tried to slap at his hands, but the man moved faster than she could follow. She had a hard time mimicking his movements because there was little pattern to them. This, at least for him, seemed new.

To her shock, he’d bared her breasts. Now naked from the waist up, she couldn’t think about much more than keeping the rest of her clothes on. “Xaveht!”

He shifted off her, and she was naked.

“Wh-what are you doing?” ended in a high-pitched squeak when he removed his loincloth and boots to reveal perfection.

He covered her in seconds and nudged her thighs wider.

Thought left her as emotion took over. The sensation of oneness with him filled her from head to toe. Xaveht and she belonged together. And another waited in the background, a hovering energy that pressed at her to accept everything and submit.

All-consuming need struck her mute, until she looked deeply into Xaveht’s blazing eyes.

“Yes,” she hissed, feeling him to her bones. She needed more, though, and Xav, bless him, didn’t disappoint.

A Civilized Mating originally released in 2015 with All Romance eBooks. This is a m/m/f romance, where everyone is touching everyone. Enjoy! 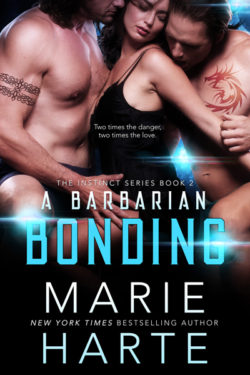 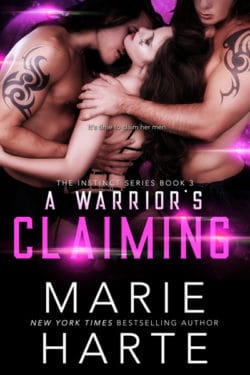