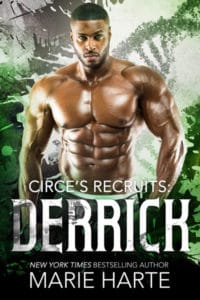 Derrick doesn’t trust Sabrina Torrence. She’s an agent for an enemy whose mission in life is to kill and enslave Circs—shapeshifters like Derrick. No matter that she helped them before. Derrick knows she’s got her own agenda. If only she were less attractive, he might be able to keep his hands off her and his mind on the job. But a stunning circumstance forces him to reevaluate all he once thought. Will this new insight be too late to save their growing love?

Warning: Get ready for some fascinating fiction! Steamy group scenes and mm fun with a central mf romance. Expect more government conspiracies, rough Marines, genetic experiments, and snark. This book is not for the faint of heart. Enjoy!

Derrick Packard growled at his friend Hale Rogers with a frustration he could almost taste. “Where the hell is she?” For several weeks they’d been looking, trying to pick up Torrence’s trail, only to lose it again.

Hale slowly drove them up and down a deserted street in an area just north of Trenton, where she’d last been seen. They looked for her in the side streets and the alleyways between the run-down buildings. “D, something’s not right with this chick. I don’t care what Kelly said. Torrence must have had some ulterior motive for saving her. The PPA never does anything without a reason.”

Derrick agreed. But several weeks after Kelly’s rescue, he still couldn’t get her kidnapper/savior out of his mind. He was a Circ, dammit. Pearson Labs and the PPA were his enemies. Yet each time he recalled the brief flash he’d seen of the woman’s face, of the steely determination in her light gray eyes, his dick hardened like iron. Hell, talk about bad timing.

“Cut it out,” Hale growled.

Like Derrick and the other members of Circe’s Recruits, Hale was a Circ — a genetically altered person who possessed increased sensory abilities. He could see, smell, and hear ten times better than any human. With an ability to change, to shape-shift into a hulklike creature of monstrous strength, speed, and stamina, Hale and his friends were man-made weapons capable of great destruction.

Once, the military had used them to protect the nation. Called Project Dawn, the program had been run by Elliot Pearl. He and his scientists had created two platoons of super soldiers. For five years, they’d been the country’s top secret golden boys. And then everything went to shit. A lot like now, like it always happened whenever that dickhead Pearl was involved.

“Dammit, D. We just escaped a house full of female hormones. I was hoping to avoid this. I’m not up for a mating heat right now.” Hale squirmed in his seat, his erection impossible to miss. “Tone it the fuck down.”

Flushing, Derrick forced himself to think about something nonsexual. “Sorry, man.”

Hale grumbled under his breath, and they returned their attention to looking for Torrence. A mating heat was not something Derrick wanted either. Unfortunately, in addition to cursing the men with superhuman abilities and enhanced DNA, Project Dawn pushed Circs to procreate. Evolution at its finest, Derrick thought with a snarl.

Only able to be satisfied by another Circ when the mating heat struck, Derrick and his four male squad mates had been forced to sexually fulfill one another. At least, they had until Caitlyn, and then Kelly, had been discovered. Now Circe’s Recruits numbered seven. Derrick would have been happier about the matter if the females weren’t mated. Along with a fierce desire to copulate, Circs were possessive. The females were damned strong, the males violently aggressive.

Roane had claimed Caitlyn, no question. Zack and Ace claimed each other and Kelly, who, now pregnant, didn’t arouse Derrick’s lust as much as she aroused his protective instincts. That left just Derrick…and Hale.

Derrick studied his friend. A solid white boy, probably with Viking ancestry. Hale had short, sandy hair and hazel eyes that turned absolutely green when he was pissed or aroused. Thankfully, they were hazel now. And Derrick intended them to stay that way.

He flexed his arm, staring at his hand as he deliberately transformed it into his own personal weapon. Simultaneously fascinated and horrified by his ability to change, he was still taken with his darkened skin. Normally a rich brown, it was now raw umber. His fingers elongated, ending in sharp talons an inch long. He could cut with those nails as easily as he could bite through flesh when his fangs extended. Those fangs that pushed through his gums when danger neared —

Hale stopped on a dime.

Derrick opened his mouth and tasted her on his tongue. A glance at a darkened warehouse beckoned him closer. “There.”

Hale pulled inside the building, and they stared at a battered vehicle, the same make and color as the one Torrence had been spotted in a few days ago. “She was here.”

They left the truck to investigate.

Derrick looked around the building and followed her scent toward the back, away from the complex and facing the woods. “The scent’s strong. She was here recently,” he said. “I can still taste her.”

“She would have made for the woods. That’s what I’d do.” Hale shook his head. “One more lead to follow. Shit, D. We shouldn’t be out here on our own, not without backup. If Torrence is near, you can bet the PPA is too. They’ve been one step ahead of us all month.”

Derrick had a hard time focusing. His beast was calling to him, demanding he find and capture the female on the run. Take her before the enemy does. Find. Taste. Keep.

The urge to mate grew once more, and Hale narrowed his stare…

“Dammit, don’t do this.” Hale breathed deeply and closed his eyes. “I can barely hold on when Caitlyn’s fucking Roane at home. Now we’ve got a pregnant Kelly and two raging, walking hormones in Ace and Zack. Control it, D. I don’t want to deal with this right now.”

“You think I do?” The lingering smell of Sabrina Torrence called to Derrick on a basic level. Not thinking about it, he changed. Six feet four inches of man became seven and a half feet of raging Circ. His muscle mass increased, as did his sex drive. He ripped through everything but his elastic-waist trousers, pushing them to his feet. He kicked them aside and waited, breathing hard.

Hale snarled and quickly discarded his clothing, changing in an instant. “This is not a good time. The PPA could be anywhere around here.”

Derrick knew he was right, but he couldn’t help himself. His beast needed, desperately. Derrick took another whiff of rich, feminine perfume, not surprised when it mixed with Hale’s earthy desire.

“I don’t sense them.” He looked at Hale. “I need this.” So when I find her, I won’t hurt her. Shaking his head at his baffling thoughts, Derrick stalked Hale the way he would prey. His body hurt, his beast desired.

By the look and smell of Hale’s arousal, he knew the other male was also in the grip of an extreme lust.

Hale grinned, his teeth sharp, his slitted pupils expanding to overtake the glaring green of his eyes. “You know, my beast is in a good mood. I’ll let you have what you need, but you have to earn it. You want it? You’re gonna have to take it.”

Derrick laughed. “No problem, playboy. Who’s bigger and meaner?” He licked his lips, hungry to feel Hale. Without giving Hale time to prepare, Derrick launched himself at him.

When changed, Derrick towered over everyone, with the exception of Roane, and his muscles were more massive. Holding Hale took skill, though, because of the five of them, Hale had the most speed. He was as agile as a fucking cat, second in their chain of command, and built like a tank. Overpowering Hale was a challenge, one Derrick’s beast loved to engage. Thankfully, Hale didn’t make him work too hard. Either he felt Derrick’s need, or he realized the precariousness of their position.

Derrick’s beast didn’t care. It drove him to slake his lusts. Torrence couldn’t be allowed much more time to evade, he could feel it. Knocking Hale to the ground, Derrick quickly struck him in the solar plexus, momentarily winding him. Picking up and shoving Hale belly-down over a nearby steel table, Derrick readied to satisfy his beast’s need…

Later, he hurriedly pulled away and dressed in his trousers. He remained changed while Hale turned back to normal.

“No need to share everything with the others,” Derrick mumbled, ashamed at his loss of control. His damned beast always took command in the throes of a mating heat.

Hale sighed. “Go find the woman while I wait here. I’ll keep an eye on the vehicle and watch out for the PPA.” Hale walked to their truck and returned with an earpiece he handed to Derrick. “You have any trouble, you let me know.” Hale bent over to pick up his clothes, and Derrick forced himself to turn away. Unlike his squad mates Zack and Ace, his human half had no desire to mate a male. Or a female, for that matter.

Sex for sex’s sake was all well and good. Even taking Hale fulfilled a basic core need. To feed a hunger. Now it was done. Time to find what he’d come here for. A woman, the enemy, named S. Torrence. Then maybe he’d find what it was about her that called to his beast with such desperation.

Women. Nothing but trouble, he reminded himself as he loped into the woods. With a growl and a groan, Derrick merged fully with his beast and tracked down the source of his latest unease. Her scent was a heady fragrance that wrapped around his balls and wouldn’t let go.

“Led by my dick. Christ, I’m turning into Hale.”

Sometime later, what he found shocked the hell out of him. Half a dozen dead PPA agents littered the forest ground. Heart-wrenching weeping hurt his beast, and he took a step back as surprise hit him once more.

Curled up in a ball by a large boulder lay a naked female. Her golden skin was scratched, bruised, and bleeding. Long, dark hair covered her face until she shifted and looked at him. Gray eyes clouded with grief pierced him where he stood. The emotional punch hit him hard, and as he stared at her, he felt his heart rip in two.

Not liking his connection with what had to be S. Torrence — the enemy — Derrick snarled and approached, fully expecting a fight on his hands. But she didn’t do more than turn her head away, trembling with surrender.

The submissive gesture undid him. Heedless of the danger, Derrick said nothing as he took her in his arms and carried her away. She remained stiff for several heartbeats before she finally relaxed. Curling her hands against his chest, she sighed and eased into his hold, her soft curves pressing into his hard flesh like licks of fire over his skin.

Scared at her effortless effect on him, Derrick wanted nothing more than to drop her and never set eyes on her again. His beast, however, nearly purred with satisfaction as her scent filled his head.

“Nothing but trouble,” he grumbled, remembering the last woman who’d left him as fast as she could run, the way they all did.

Torrence paid no heed to his irritation, nor did his beast. Derrick promised himself to keep an eye on her even as he kept his distance from the dangerously intriguing female.

Then she snuggled closer, and he started purring for real.

NOTE: This book is a re-release. Same material as the first edition, but with a newer cover and edits. 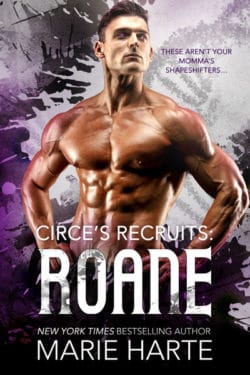 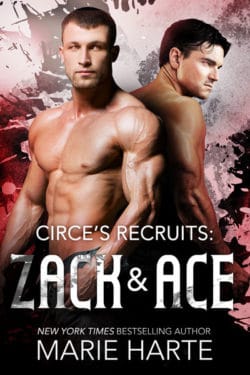 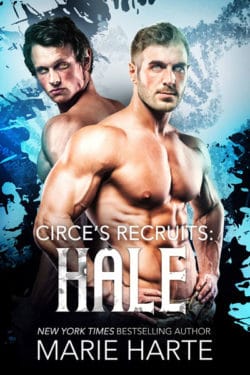